What makes people go thru walls?

Have you ever wondered why certain companies have extremely loyal band of employees and some do not? I am not talking of people who continue to work in an environment due to sheer inertia and the inherent human inclination to avoid a change. I am talking about those set of people who work with maniacal ferocity towards a vision often against large or at least better placed competitors. What makes them drink the “Kool Aid”? What gets them the mantra?

What is that the leaders of these companies do? Without exception, these employees consider their leaders to be charismatic. What is charisma? And how does one achieve it? Is it purely a personality thing?

Sometime back, I was doing some research on what makes organizations last very long. Most companies die out before reaching double digits of age. I think it is worthwhile to study the parallels in how these employees behave with some very long standing organizations. The three longest standing organizations that I can think of are (i) the army (ii) the church and (ii) universities. Their longevity has run from 200 to 2000 years. Only half a dozen of corporate organizations can come close to even 200 years of age.

I will take a parallel from the army to explain the loyalty of employees. Why would any logical-minded soldier rush up a hill under heavy machine fire with incredible personal peril? Similarly, why would anybody not revoke their religious beliefs even under the severest torture? Why do employees work for a small company where the odds are against its survival?

There are three conditions that need to come together for the above to happen.

(*) A soldier needs to have tremendous belief in the commander that he is asking them to charge the right hill.

(*) A soldier needs to believe that, with enough sacrifice, the hill can be conquered.

(*) A soldier needs to believe that they have the “moral” right to win the hill.

(*) The leader has painted a great vision – a vision that surpasses Wall Street expectation of mere fiscal pressures – a vision that shows why the world will be a far better place to live in – a world you would like to leave for your children if you achieve your vision. The leader exudes confidence in explaining to the employees why that is the “right” hill to charge up.

(*) The leader has impressed upon the employees that the only difference between the winner and the losers is execution. It is hard work. It is a success that is built upon a lot of sacrifice from the employees and their families. The leader acknowledges the sacrifice and thanks them for that. But also maintains that there is no short cut to success. Is quick to articulate why he believes he has the best “soldiers” too. What makes his employees different from other employees?

(*) The leader impresses upon his employees why it is their moral right to win the war. How they have the best vision. How the world is served best with their view of world order. How they focus on the right things which supersede small elements of focus like quarterly profits which is the sole focus of the competitors. How the competitors are busy make money for themselves while they want to make money for their customers.

That is the essence of what I have concluded…

Please let me know if you have any thoughts on this. Or what your experience has been.

7
Category: Reflections | 3 Comments on What makes people go thru walls? 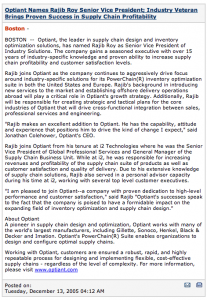 During my last stint of 10 years in an enterprise application company, I was fortunate enough to see many mergers and acquisitions as we grew (over a dozen). The acquisitions ranged from very small companies in far flung places like Scandinavia to the largest software acquisition (of that time).

The lessons that I learnt are the following:

Things always look great from outside. Almost always things were much more hairy than was visible before the acquisition. Be aware that somebody who is willing to be sold out would for very obvious reasons put their best foot forward. There are more stories than you would care to hear in my previous company where we had everybody involved in the acquisition swearing by the greatness of the company to be acquired and without exception, each one of them turned out to be disasters. That does not mean the executives and team members were not intelligent (although I will admit they were more impressionable than other others – I think that happens in young software companies especially if they do not have a healthy ratio of seasoned executives brought in from outside). What it says is that take all your time to do the due diligence. Assume that 50% of your conclusions are wrong. Then seek data to disprove that hypothesis.

You cannot integrate yourself to greatness This is perhaps the greatest learning I had. As one of my peers once summarized it best – When you buy IP, it is in the people not the software. Without exception, we followed the software route. Which means we tried to “integrate” all these products into one set of solutions? The nightmare was unbelievably costly and is what I believe eventually brought us to our knees. You are much better off taking the hit of isolating top 30% of the acquired company’s engineering group aside and tell them to rebuild the solution on your existing architecture all over again.

Don’t worry about which is the better architecture. In almost all cases, it is like debating over religion. Technology is way over-rated for most enterprise problems that customers face. You will much faster to market with a truly integrated solution with lesser overall cost (for both you and your customers) of ownership by taking the hit upfront. I admit it takes guts to do this. The whole world is expecting to show you results from the merger. But companies like Siebel, Cisco have this model outrageously successful.

I would like to reflect on the only successful merger we had. The big difference I see from the other mergers is that we had some amount of history with this company. We used to resell their product for about a year. I think that gave us a great due diligence. We understood what was working and not working in positioning this product to our customers and what the difficulties the customers were having with the product were. What we did not do is the point number 3 above and I have paid heavily for it!

Feel free to send me comments about your experience.