Circa 1986. Early evening. A few of us were in the hostel (dorm) grounds. Some of us were playing volleyball on one side of the ground. A few more were waiting for their turn and then some more – both on the ground and from the corridors of the three story building were lazily watching us play.

At some point, the game had reached a feverish pitch with the ball having switched sides multiple times without hitting the ground. In one of those heated moments when excitement had reached a peak, the ball came to Girish. He was a first year student – one year junior to me then.

At that moment, he shuffled his feet with eyes firmly on the ball and got himself in the trajectory of the ball with the arms locked to return the ball. As the rest of us fixated our sights on Girish, he calmly got ready for the ball and at the very last moment he called out “Out ball” and stepped away from his position without touching the ball. His eyes though followed the ball all the way to the ground and he was absolutely right on his call. The ball did fall about half a foot outside the chalk line.

As Girish triumphantly looked back, he was hit with a scenario he could not have been prepared for – even if he had tried to. Everybody – the players, the spectators and the folks on the corridors of the different floors were all rolling on the floor. It was like a wave of boisterous laughter had suddenly hit the hostel. You could see a few more of the students coming out of their rooms and peeking curiously – trying to figure out what the whole commotion was all about.

Of all the people who did not know what the commotion was all about, Girish was one! He kept alternating between looking at the spot where the ball fell (which was clearly out) and looking at the others on the ground laughing – his finger on his chin with that quizzical look all this time.

Till one of the players sobered up, got up, dusted his pants off all the dirt and went up to Girish – “Idiot, that was a pass from your own team mate!! What the heck are you calling Out ball for?”. I am sure that was an young engineer’s first lesson in the difference between being right and being successful.

Girish was a few doors away from me. There are way too many funny stories about him and wing cricket and table tennis to narrate in one day. Or even a month.

29 years later, a little birdie told me (no, I do not follow Donald Trump’s tweets) that he would be in Cancun when I would be there too! This morning, after having a coffee with Sharmila by the beach, I put on my running shoes and went running for about 5 miles (8Kish) to his hotel to meet him.

Girish has not changed at all. Looks the same. Very funny still. Got that somewhat-lost-professor look around him. But razor sharp in his intellect. And his sense of humor!!

I also learnt about how he and Sandhya are proud parents of two siblings they have adopted from Guatemala.

Running another near 5 miles back to my hotel, I could only think of one sentiment towards this gentleman… “You are a good man, Muckai Girish, you are a good man. They don’t make them like you no more!!” 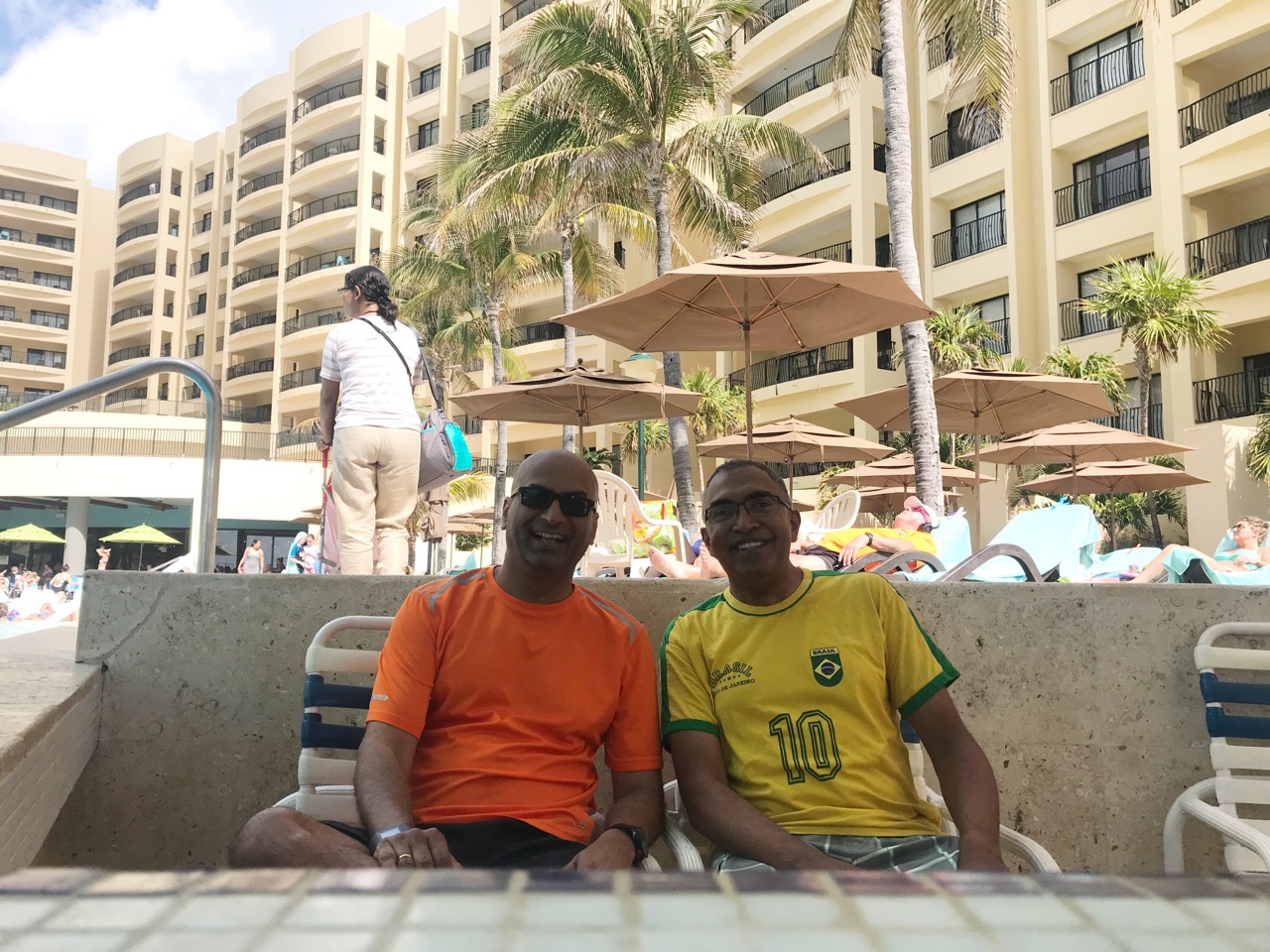