Last week, right about now, I was in Atlanta airport (just like I am now). I was waiting to board my flight to St. Petersburg. I was also wondering what intersection point might be awaiting me. Looked up the map of St. Pete to check out the neighboring cities and ran a quick search thru my Contacts list. There was a possibility to meet this gentleman that I had not met in a long long time. I knew he had retired, therefore, I was not even sure if his phone numbers would work. The email id was of HSBC – surely that would not work.

Just as they started boarding us, I took a chance and dialed what I thought was his cell phone number. Nobody picked up and the voicemail was the default message – so could not figure out if it was his number still. Next, tried another number – which I thought was his Tampa home number. I was not even sure if he was in Tampa still. Again, went to voicemail. So, two voicemails later, I resigned to fate and snaked my way into the plane and settled down.

I was busy watching all the passengers coming into the plane when the phone rang. It was from the home number! I was half expecting it to be somebody who would say “Who is this? I had a call at my number from this number”. As luck would have it, it was indeed the gentleman I was looking for. In short order, we set up a dinner engagement for the following day.

And that is how I got to meet once again the gentleman who was a big influence in my life when I came to this country. Chito (Rosauro Santos Ocampo) was my first boss in this country. I worked in his team in Citibank in Pompano Beach. That is when I lived in Coral Springs (yes, in the same apartment building as my other friend from high school junior year, as it turned out – but you probably have read that story on my blog already).

There were a few of us – young technology folks that were transferred from Mumbai to this location. Not having gone thru college here (unlike most Indians in this country at that time), it was baptism by fire. Picking up local culture, ethos while reporting to work full time and learning new stuff altogether could be unnerving at times. Driving on the other side of the road turned out to be surprisingly less daunting. I guess those medians helped. But there were other aspects that completely blew us away. Someday I will tell you how confusing a salad dressing can be to an unsuspecting fresh off the boat Indian 🙂

Chito (and his wife Malou) and Sharmila and myself grew up to get to be very close to each other. They were always very kind in helping us get accustomed to a whole new country. They themselves came from the Philippines. The whole team then got transferred to Dallas. That is how all of us landed in Dallas. And then eventually we went our own ways. Chito went back to Florida, switched to HSBC and then retired.

I was marveling at his terrific memory that evening. He remembered each and every person in our office from those days (I am talking 1993) and enquired about them. Fortunately, I am in touch with all of them and therefore was able to get him up to speed quickly. Some of the details he remembered was very impressive.

Eventually, I asked him – “how is post retirement life treating you”?
“Very good. I work at Lowe’s”, he said!
“Consulting? I did not know Lowe had a big office here”.
“Oh! no! I work at the retail store”
And I was like “What????”

Turns out Chito always loved tools, hardware, fixing things and such. As he told me, he could be left at a hardware store in the morning and picked up in the evening – and he would happily go around the store the whole day. (I know a woman like that in my house who behaves like that in dress stores 🙂 ). Turns out he goes and works there because he loves being around tools and stuff. Additionally, because of all the walking and lifting, he is getting a terrific exercise.

His incredible sense of humor is still intact. I distinctly remember he came to office one day, walked to my cube and said he got a ticket while driving thru the side road in Dallas Fort Worth airport. I enquired about his speed when he got caught. He explained that the speed limit was 35 mph. But cops usually allowed a tolerance of 10 mph above it, he said. And he claimed he was within a 10 mph deviation. Looking at my surprised face, he gestured his finger upwards and clarified that he meant deviation from the upper tolerance limit that we was talking about!! He was clocked at 55!!

Speaking of his hand gestures, that was another thing about him. His hands and facial expressions would do as much talking as his mouth (my brother is the same way; sometimes I make my brother sit on his hands and then talk; it results in hilarious situations). So, there was this day, right next to the main office door in our Pompano Beach office, Chito was agitatedly explaining something. The details completely escape me but I remember that he made the comment “It is like he almost washed his hands off it”. And as he said that, his hands smoothly made gestures as if his hands were under a tap and then he washed his hands off literally! And that is not all! As he went off to his next line, you could see him pulling his hands to the side and absentmindedly wipe them off each other – as if they had become really wet!! I could not help but laugh aloud!!

We caught up on his late father, his family in the Philippines, his two old dogs and the physical challenges he went thru ten years back that he had to will himself thru.

He has lost weight, looked great and seemed very happy! He most certainly deserves to be. 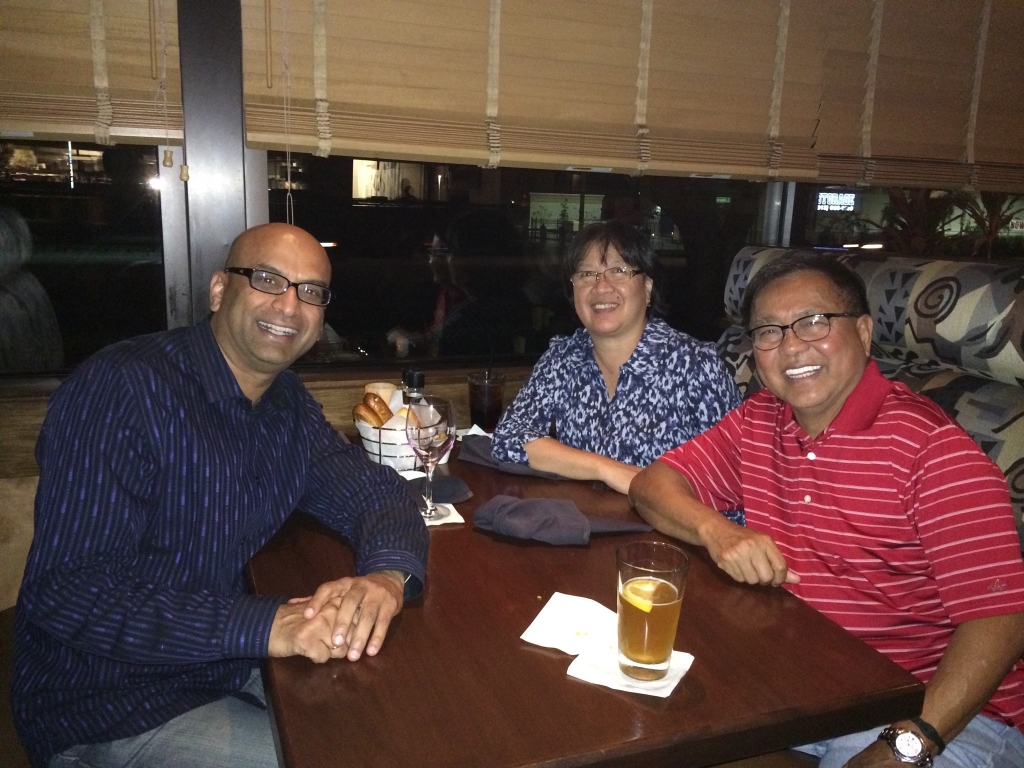