After Sir Nandy, it was going to be lunch time and go thru Sharmila’s shopping list. (Yes, there is always a shopping list 🙂 ). But I was wondering if we could squeeze in one more quick visit. My brother readily agreed. So, we headed off to Mr. Mukherjee.

Now, I have never seen Mr. Mukherjee in my life. But he is my friend Samaresh’s dad. You might recognize Samaresh from our Sunday morning run blog posts. In fact, Samaresh is one of the founders of Chalupa group and is indeed the person who coined the name “Chalupa” for our group.

Getting back to Mr. Mukherjee, he lost his wife (Samaresh’s mom) very recently. And I had heard from Samaresh that he was going thru a tough adjustment period. So, I figured I would check on him to see that everything was going on as well as they could given the circumstances. And also send Samaresh a picture of his dad!!

When I walked in, I saw a very frail gentleman laying down on his bed. He got up when he saw me. I introduced myself and sat next to him in the bed. Introduction was not easy. First of all, as I said, we had never seen each other before. And he is very hard of hearing. So, it took me some time to establish that I was his younger son’s friend from Atlanta. For about five minutes, I could not get across to him with my name. Finally, I had a brainwave. I fished out my iPhone and started writing on the Notes app. He brought out his glasses and read it. And then addressed me as “Rajib”. That iPhone Notes app came out to be very handy throughout our conversation.

He was speaking very softly and haltingly. But slowly, I got the story out. He is nearly 87 years old. He was married for 65 years! And then he lost his wife. My mind was racing thru so many thoughts. How do you cope with a world where you wake up one day with your life partner for 65 years no more? Worse, she suffered a lot for quite a few months before she passed away. What I gathered from his daughter in law was that even he wanted his wife to move on and be released from further suffering. What a heart breaking experience it must be to watch your companion of 65 years suffer through so much in front of your eyes with the full idea that she is not going to come out of it by herself. And at that an advanced age, you probably do not give expression to your sorrow so easily either.

I remember Samaresh narrating that his dad eventually did break down after his wife was taken away. And that is first time he saw him cry.

Our conversations were slow and halting, as I explained. I suddenly remembered Lord Tennyson’s “Home they brought her warrior dead”! I was wondering if a similar trick would work. I recollected that Samaresh’s family had joined us together with my family at the Chalupa run last Sunday. Quickly went to my blogsite on the iPhone and picked out the picture – zoomed in and introduced him to my wife and then my younger daughter. I, then kept moving along and stopped at his granddaughter’s picture.

“Chintey paarchhen? Aapnar naatni” (Do you recognize your granddaughter?)
He suddenly perked up – “Eta chhoto-ta” (This is the younger one)
I kept moving along the pictures of the runners. And stopped again.
“Aar e boro”, he told me showing his elder granddaughter in the picture.

It worked!! He suddenly got up from the bed, walked to a shelf nearby, opened it, reached to the top and then brought out an album. Walked back to the bed and sat next to me. I realized he had gotten excited by his memories of granddaughters from America and was going to match my pictures with his.

He patiently leafed thru the pages and showed me many pictures of Samaresh’s daughters and explained where those pictures were taken. My brother, smartly, used my iPhone that was lying on the bed to capture the moments.

That was a very satisfying experience – seeing him get energized. He even wanted to come downstairs to see us off. We insisted that it was too hot and that we would see ourselves out. “Abaar aasbey kintu taholey”, (Ok, but come back then again) he said as we bid adieu.

Finally, studying all those English poems and taking pictures after our runs – both came to some good use!! 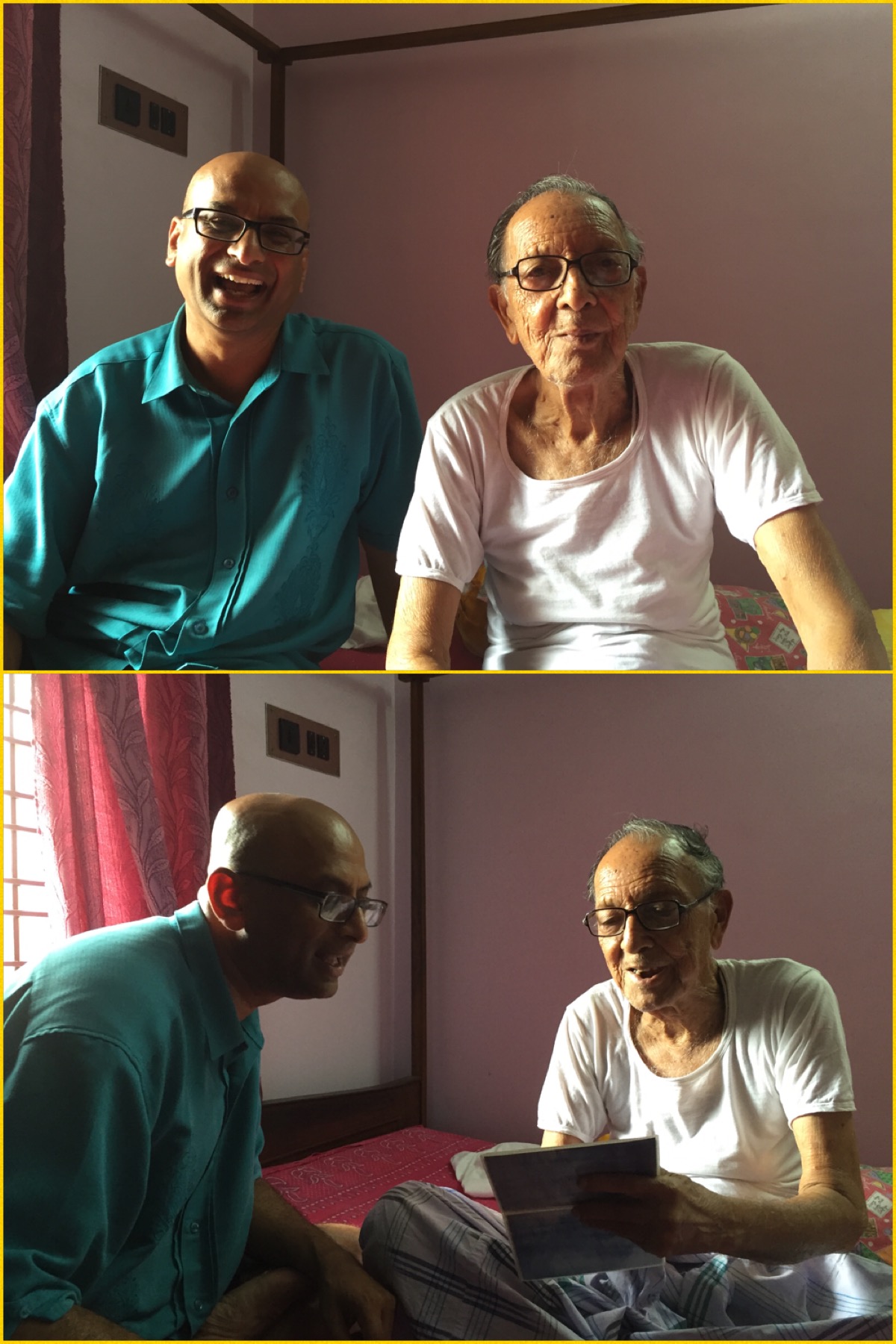