The case of missing socks!!

“I am surprised by your accent”, he said!
“Well, twenty two years of living here will do it”, I replied.
“No, I mean you have not changed your accent, at all!!”, he quickly added!
“Good! It helps in my stand up comedy routine”!!, was my comeback!

And that was the first exchange I had after we finished our hug. This gentleman had cleared out his calendar for the day so that he could drive for a few hours to get near the airport where I was landing. I had offered to drive out and see him in his town but he would have nothing of it.

And that is how I saw Manoj Rewatkar – after a good twenty two years or so. We worked together in Mumbai in my first job ever. We were part of the same project team and he certainly was the venerable UNIX guy. Coming from a renowned educational institute like IIT (Kanpur), he was, without an iota of doubt, one of the sharpest developers. I still remember the day that somehow, I sneaked into a team of three (along with him and Arpan Dinker – another sharp developer) – where we were asked to write three tools that would make all the developers in the team more productive. I think Manoj wrote one to automate regression testing (capbak?), I wrote one to cut down lines to be coded (macroprocessor?) and Arpan wrote on to speed up execution (shared memory?).

Life certainly has changed a lot from those days. But a few things about Manoj have remained the same. While he is a very successful entrepreneur and owns three businesses now, you would not realize it in the way he carries himself. Modest to a fault, he is one of the most ardent listeners and has a level of intellectual curiosity that never has stopped him from being open to new learnings. (In short, everything I want to be someday when I grow up to be as successful as he).

Our discussions for the evening were decidedly non-technical. It was mostly about perspectives on life. Sitting by the Potomac in Old Town, Alexandria in that cool evening as I picked up my bourbon and he, his red wine, I settled down comfortably to catch up on each other’s life. At one point, I was so intensely into the conversation that I did what I often do when I am concentrating – I opened up my shoes, then my socks, put the socks in the next chair (do not ask me why) and pulled up my legs and sat criss-cross-apple-sauce in the chair.

Manoj evidently has followed a lot of my thoughts on my blogs. He has given a lot of thought to those thoughts and that is what made the exchange so absorbing. On my concept of retirement (“take a year off, join back into a job, work for five years and then take another year off and continue the cycle”), he offered a little more nuanced perspective. He talked about his concept of “continuous retirement”. He first asked himself “What would I love doing even if I was retired today?”. He figured, that is what he is very passionate about. And that is what he started doing. Eventually, started his own business after having a great corporate job because he realized that corporate constraints were taking him away from his passions.

As he put it, the business has grown in leaps and bounds not because he was trying to build it big – he was just very passionate about what he did, attracted people to the company who think exactly the same way and that made them the best in the niche that they play in and then money started flowing in. In the meanwhile he and the employees have all the flexibility to take time off and do whatever they want whenever they want. Except that they are so passionate about what they do, they find themselves doing it even when they are not needed to. Also, why he has never taken any debt or capital to grow the company.

He is a true example of somebody who has reached the point where their job or business is not work really. That is what he wants to do in life – paid or otherwise. And anybody who is cynic about the approach whether one can make a living out of it should certainly visit his company someday in Richmond, VA. From his point of view, he has been retired for quite some time now.

With the flexibility of the mind thinking that he is in retirement, he has been able to expand his horizons into many other physical and mental activities. He has taken up the hobby of climbing after getting involved in a charity event to raise money by climbing. By the way, after hearing the stories of adrenaline rush and mind blowing scenes you get to see, I am thinking of putting this in my bucket list!

I mentioned to him how inspired I was by his story, his life and his attitude.
“No, I have to thank you”, he said.
“How so?”, I enquired, genuinely confused.

And that is when he reminded me how in our first job, while everybody worked very hard and long hours, I would make it a point to get my day’s job done and without fail, leave by the 5:40PM bus. He reminded me that I was new to the city and did not have many friends outside work. So, he had evidently asked me once “What do you do after you go back to the apartment?”. He recollected that I told him that I would go back, listen to music for an hour or so, and then write letters to all my friends and relatives.

It all started coming back to me. It is true that I was a stickler for time and discipline then. I would show up on time and leave on time. I would go back and listen to Ghulam Ali for about an hour, play tabla for some time and then write letters. In those days when there was no email and FB, I used to write letters. Lots of them. Like a dozen a day. With calligraphic pens. On printed stationery. And then have my dinner with the rest of my friends after they returned by the later buses. Finally, I would go for a walk diligently before I went to bed.

Then I realized – that is who I am now!! And Manoj nodded like the wise man to the young whippersnapper as if saying “Yep, Rajib! This is who you always have been. You just lost yourself for a few years in the corporate life. But you are back!”

This was supposed to be my catching up with an old friend time. Instead, it turned out to be one where I came back feeling incredibly good about myself. And I guess, that is what friends are for. Probably human beings are for. It is about making each other feel great about who they are… regardless of who they are…

After a sincere bout of thanks and a hug and a promise to keep in touch, we left – evidently feeling great about the whole meeting. So much so, that I completely forgot to pick up my socks before I left!!!! I had simply slipped on my shoes and started walking!!! 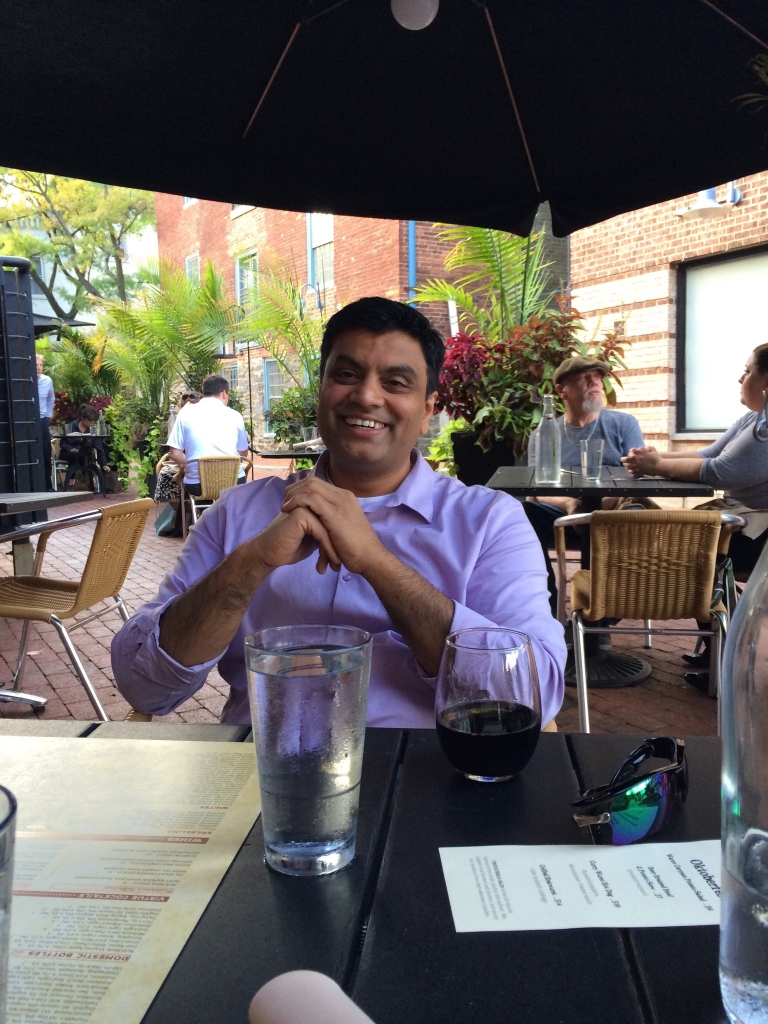