Learnt a lot this evening with Dr. Lakin

First time in Birmingham, AL. The evening was spent with Dr. Lakin from Univ. of Alabama mostly discussing how our brains learn and business models around how to help teachers. One of the more absorbing discussions was around “fluid” learning versus “crystallized” learning. I, personally, leaned more towards emphasizing fluid learning versus crystalized. Only because most domains in the world are changing fast enough that value of experience is waning (in my view).

Dr. Lakin’s counter example was “Who would you rather do surgery on your child – an experienced doctor who is done it a thousand times in the last 15 years or a younger doctor who has done it 10 times in the last year?” That question becomes more complicated when you add in another variable though. What if you are told that technology and the science (that is taught in medical schools) has undergone quite some advances in the last five years? Then, who would you rather do the surgery?

But of all the things I learnt, the one that blew my mind was the following. I am not sure how our discussions went to this but we were talking of demographic distributions. The question that I completely got wrong was “What percentage of the population in Alabama is black? How about Mississippi? Louisiana? Georgia? Birmingham? Atlanta?”. I was completely off on all of them! The stat on Birmingham blew my mind away! Guess those numbers and then Google them up. How close were you? 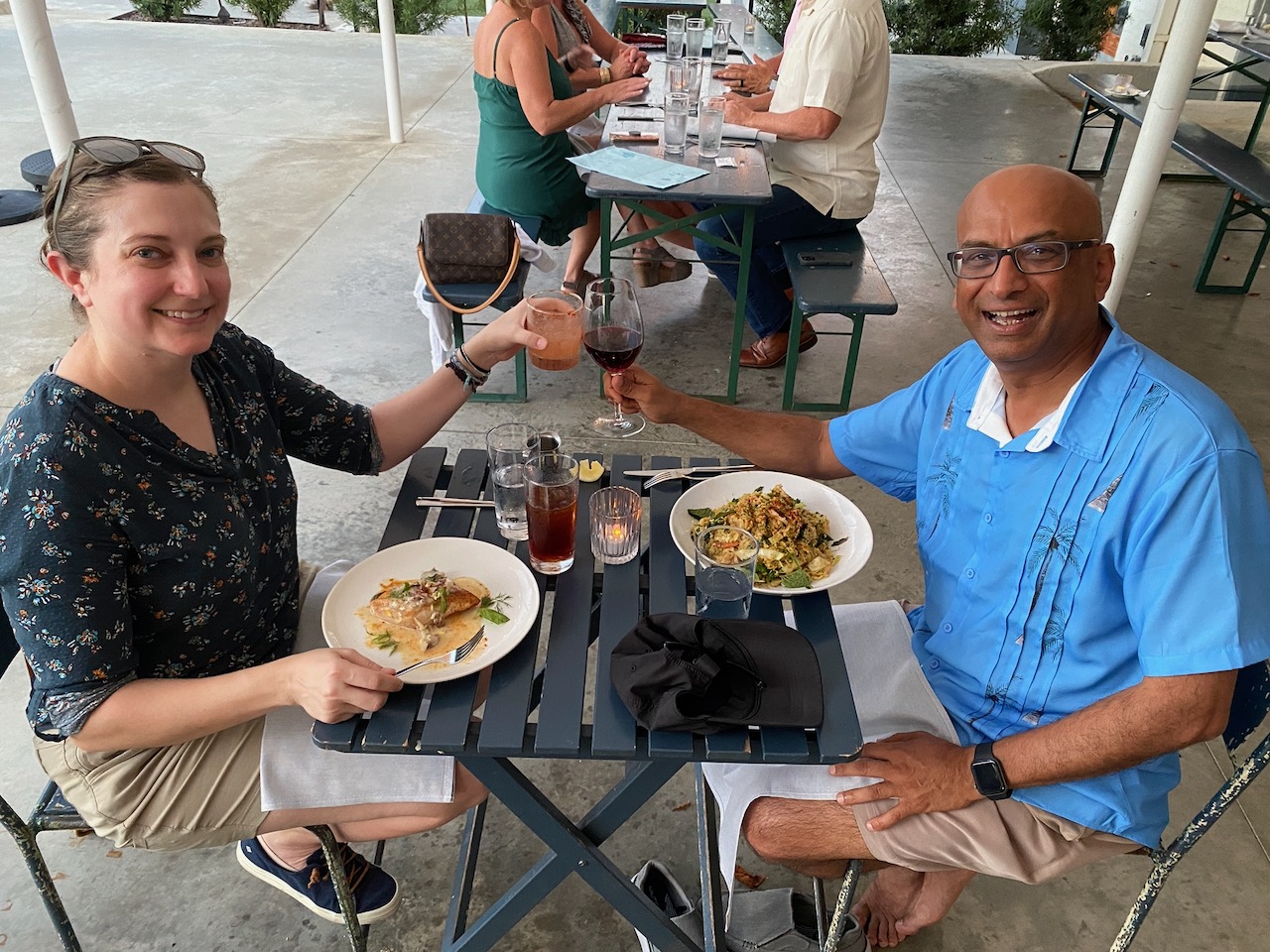 Category: Learnings | 2 Comments on Learnt a lot this evening with Dr. Lakin

Ever wondered why the political parties are called “Left” and “Right”?

I have been reading this book on Morality and how that explains the religious divide and the political divide. An interesting fact I picked up is the origin of “Left” and “Right” (in the context of political leanings).

Do you know where it comes from?

Turns out the root of this goes back to the French Revolution in 1789. The members of the French Assembly found themselves divided in their support for the revolution (against monarchy) and against (for the King). To avoid up close and personal fracas, the ones that favored change sat on the left of the chamber and the ones that favored preservation sat on the right. The terms “left” and “right” have stood for liberalism and conservatism ever since!

In a bit of irony, the “left” then were called “Republicans” (they wanted a republic over a monarchy)

Learnt something early this morning. 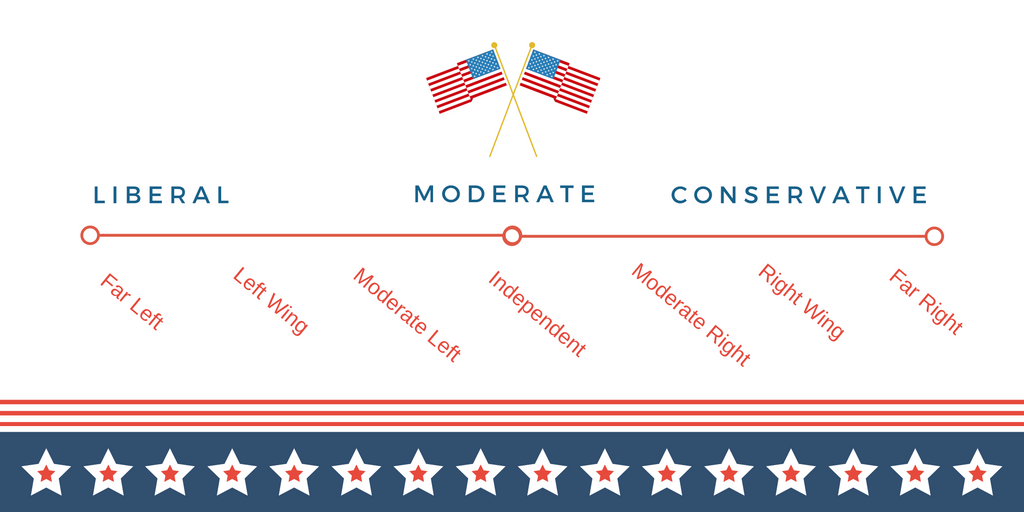 What is the difference?

My friend Somya commented on a previous post of mine about the beautiful fog in our area (we live very close by) that she found the mist very beautiful too.

That got me thinking – what is the difference between a fog and a mist? I often use them interchangeably. Or a haze for that matter. After doing some internet searching, here is what I have gathered.

A fog is essentially a low lying cloud. It is low enough that it touches the ground level (the ground you are on might up in the hills). Being a cloud, it forms slowly by evaporation of water from water bodies nearby and then condenses as water particles and hangs in the air. Visibility is usually less than a kilometer.

A mist, on the other hand, is caused by rapid condensation of water vapor – usually from volcanic activity or sharp changes in temperature and humidity. Because of the speed of condensation, the water particles are smaller. Therefore the visibility is higher and it disappears faster than a fog.

A haze, I found out is also suspension of particles in the air – but dry particles. Has nothing to do with water. Could be around a factory, as an example.

Do you know any more on this subject?

Thank you Somya – for helping me learn something new this morning!

1
Category: Learnings | 2 Comments on What is the difference?

What is the English word for this tool?

After the “last” post of the cobbler from India, this is yet another tool that I remembered from early childhood in India. Before winter, these folks would come with this tool that can be best described to look somewhat like a big safety pin – made mostly of wood except it had a thick string on one side. And the guy would have a wooden thing in his other hand that looked like a dumbbell that he would hit the string with. This whole contraption was used to fluff up the cotton that would have invariably flattened out in the mattresses and quilts after many years of use.

People who grew up in India will definitely remember this. Did any other country use a similar looking tool?

In any case, do you know what is the English word for it? After a lot of research, I am still struggling. I have found at least what the guys who are in this profession are called. Want to take a guess? 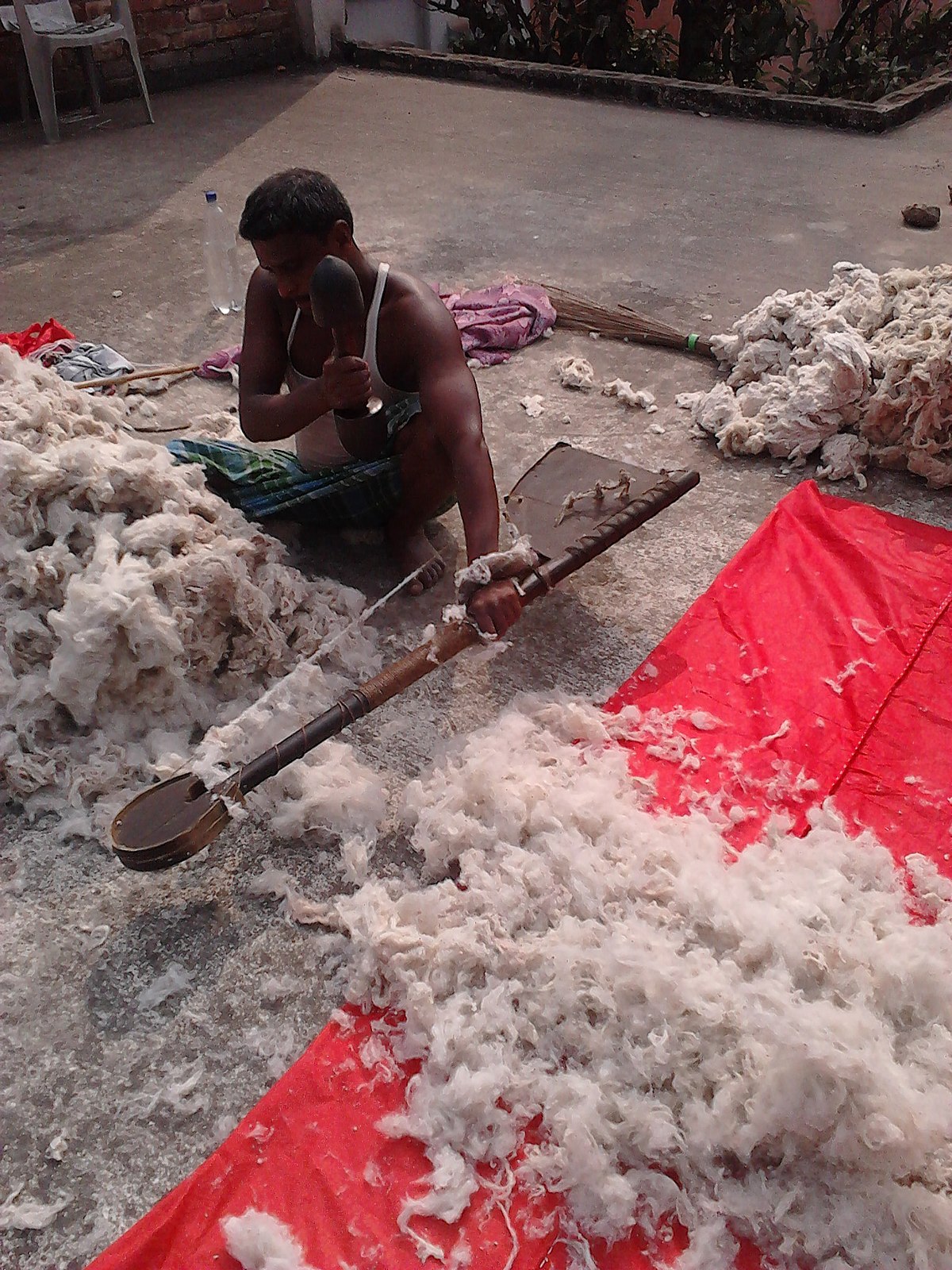 1
Category: Learnings | 7 Comments on What is the English word for this tool?

Anyways, last night I was talking to a senior of mine from school who I have respected all my life not only for his superior level of intelligence but also his thoughtfulness and rational thinking and the ability to argue both sides of a debate..

(while discussing the opinion of the masses….)

“So, how do you explain the recent disbelief in science?”, I asked.
“That is not new. It has always been there.”
“Really?”
“Yes”
“Why do you say that?”
“If you can believe in God, you can believe in any conspiracy theory. And we have been believing in God for a very long time.”

I burst out laughing. And kept smiling the rest of the evening – not just because how he put it – but I realized that there was an element of truth to it!!

A memorable one from Horace Walpole 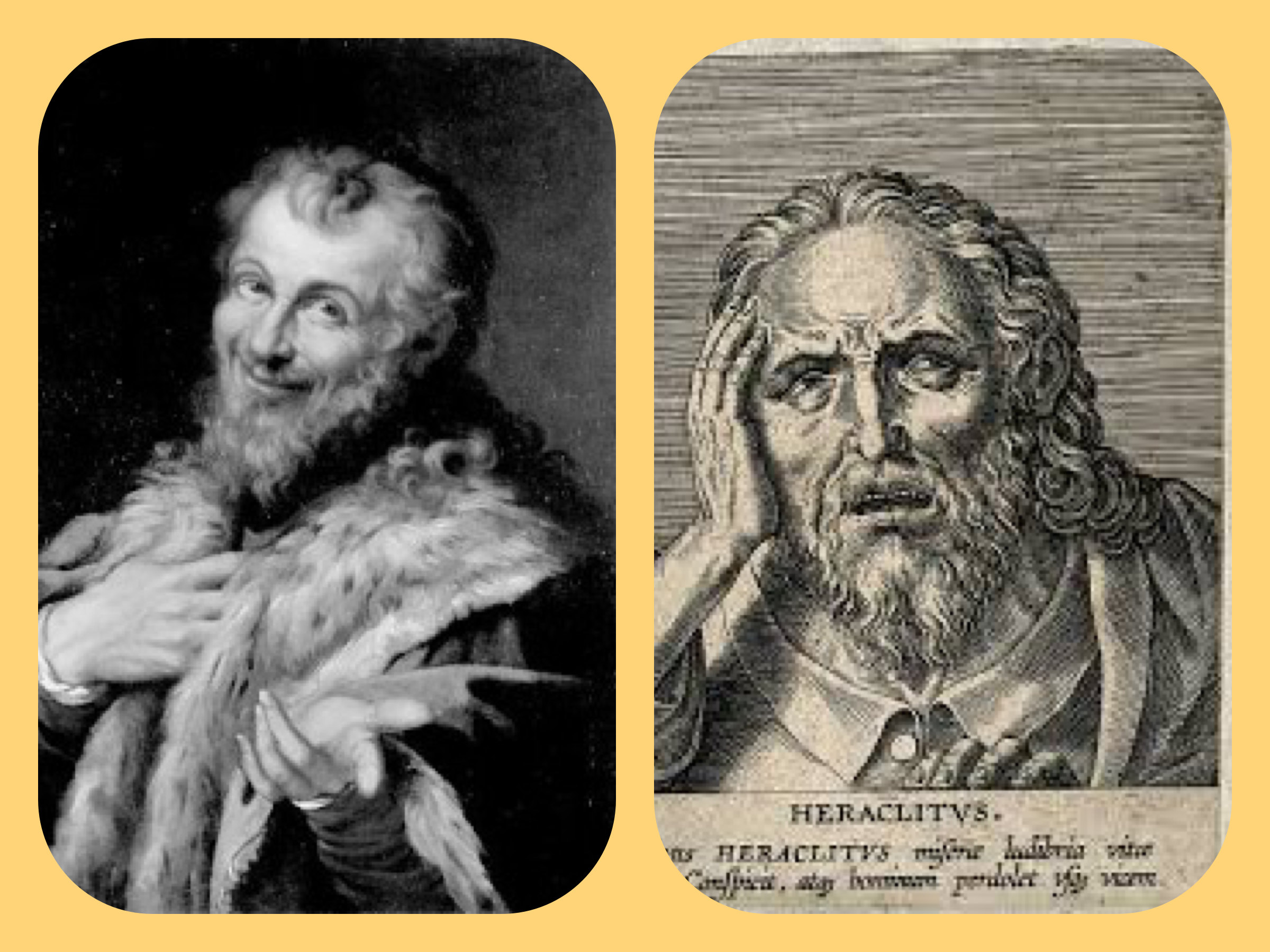 Of a carefree life…

Fivi, did I get the script right? 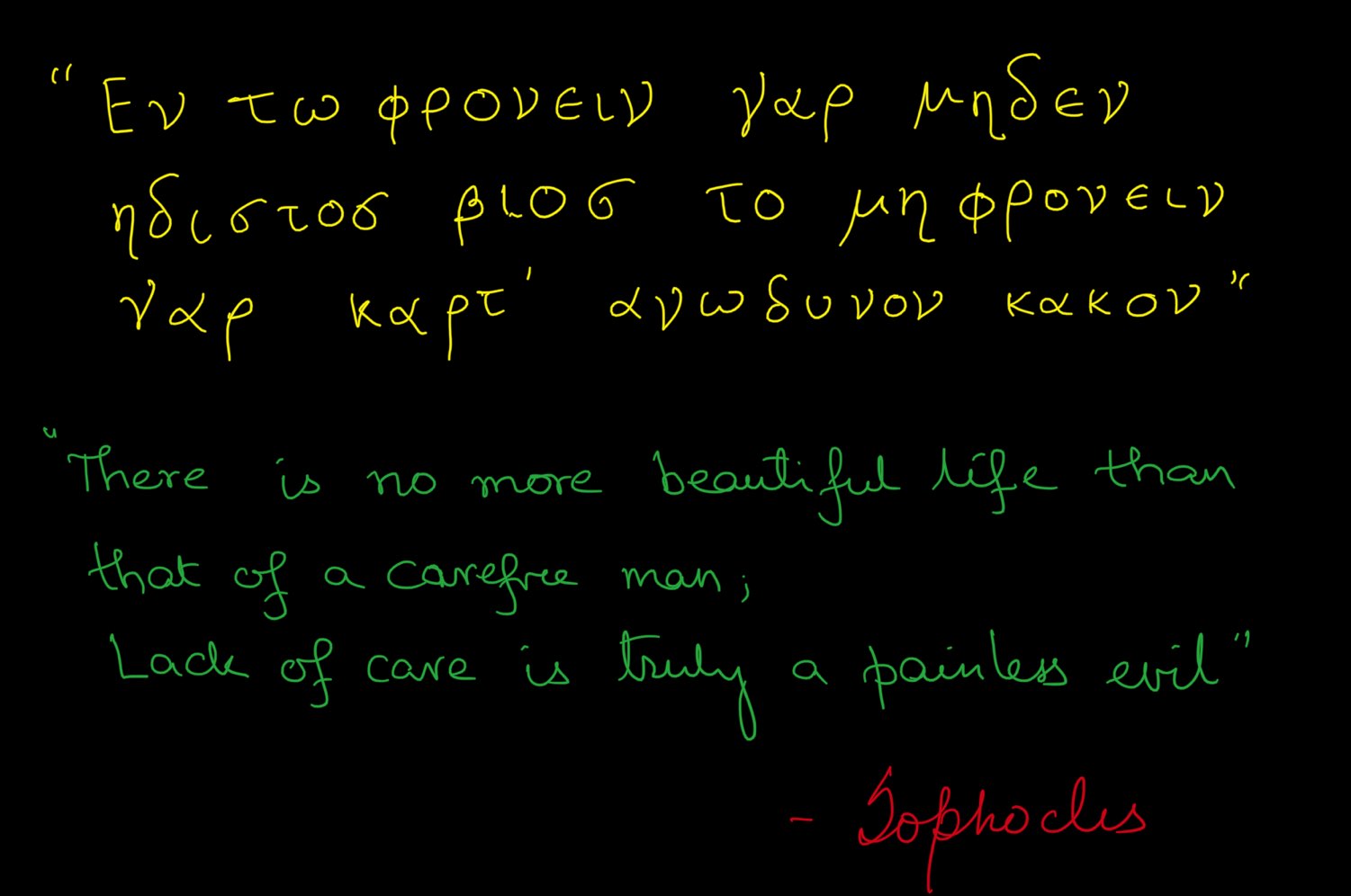 Finished up with the alphabets of the seventh language

I had learnt Tamil once about thirty years back. So, this one was a lot easier. Farsi has been the hardest so far. You can see how uncomfortable I am with writing right to left. I take more space per letter and cannot keep a straight line… 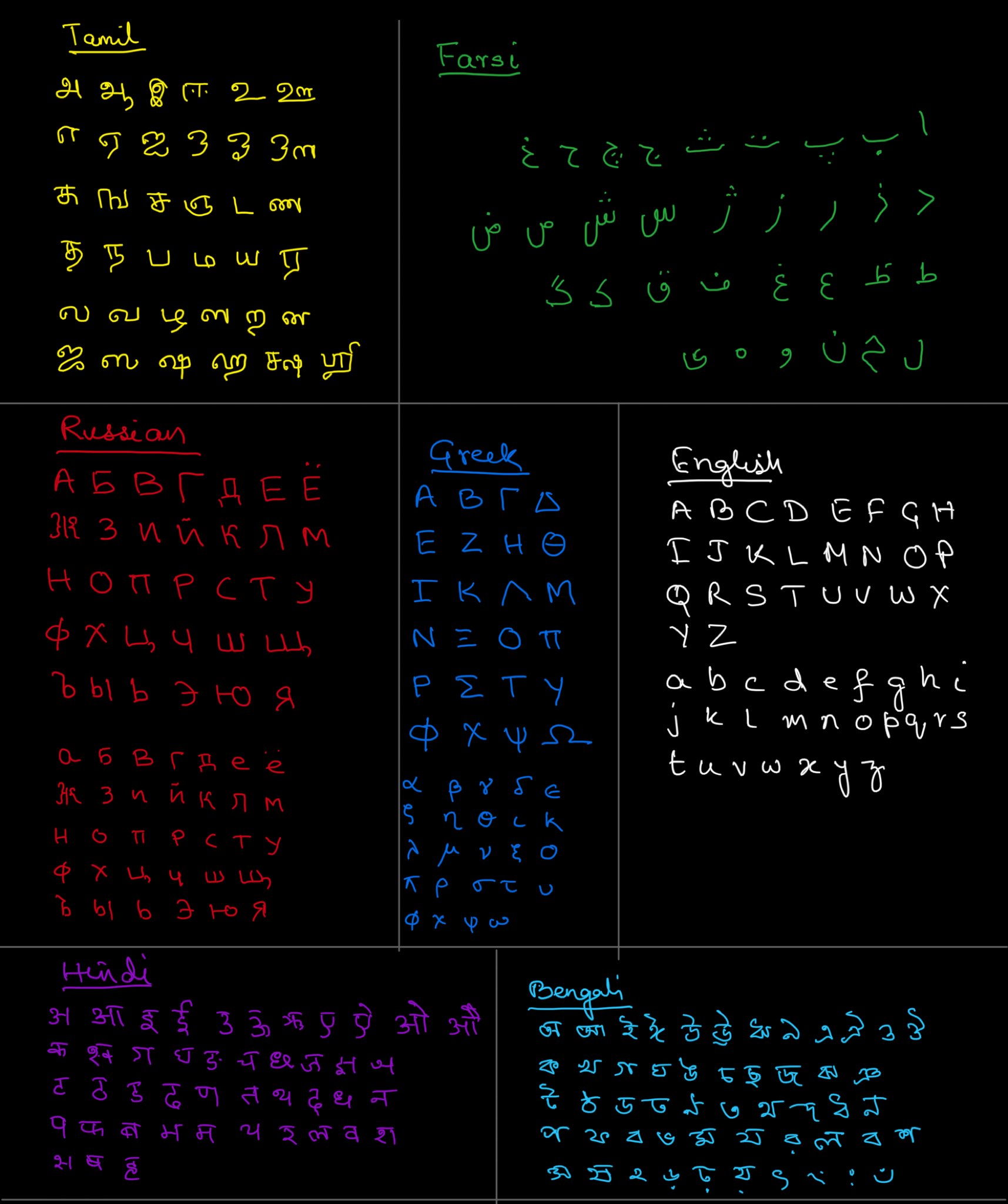 Now learning Tamil. I used to be able to read Tamil in the late 80’s. Should be a faster learning cycle this time… 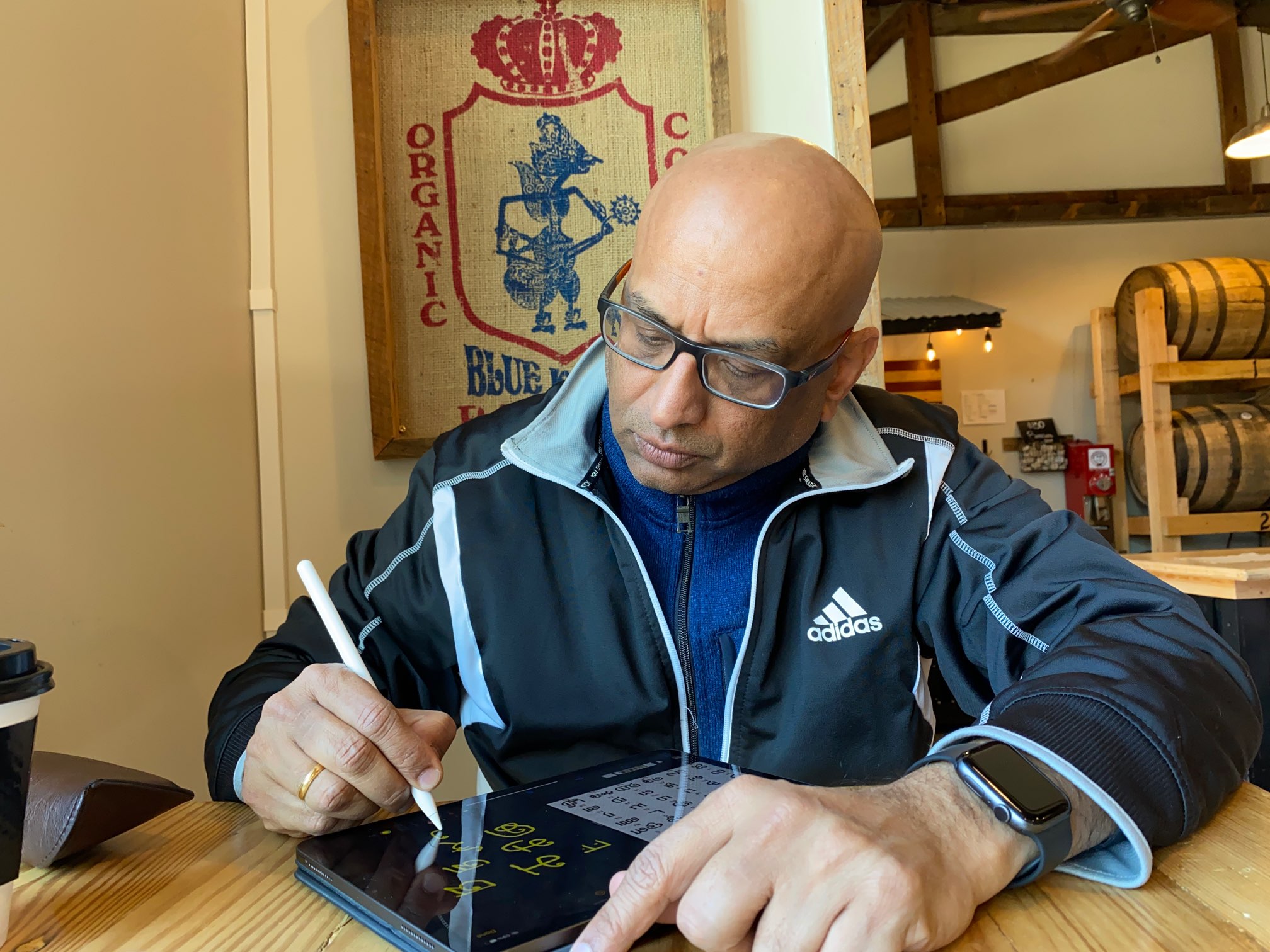 Now up to 6 language alphabets

Acquired a passing acquaintance with Farsi letters. To be sure, I still cannot get the right pronunciation for “ghein” or “qaf” (identical pronunciations, I am told). And I know only isolated letters. But it was good enough to read a signboard inside the local Bezoria restaurant yesterday. (Needless to say, normally I would have no idea what the word meant but the context was helpful in understanding the word “shawarma”).

So, here are the six language alphabets that I have learnt arranged reverse chronologically of when I learnt them.

Thinking of learning Thai letters next. They almost look like notes on a music sheet (another thing I cannot read, of course). 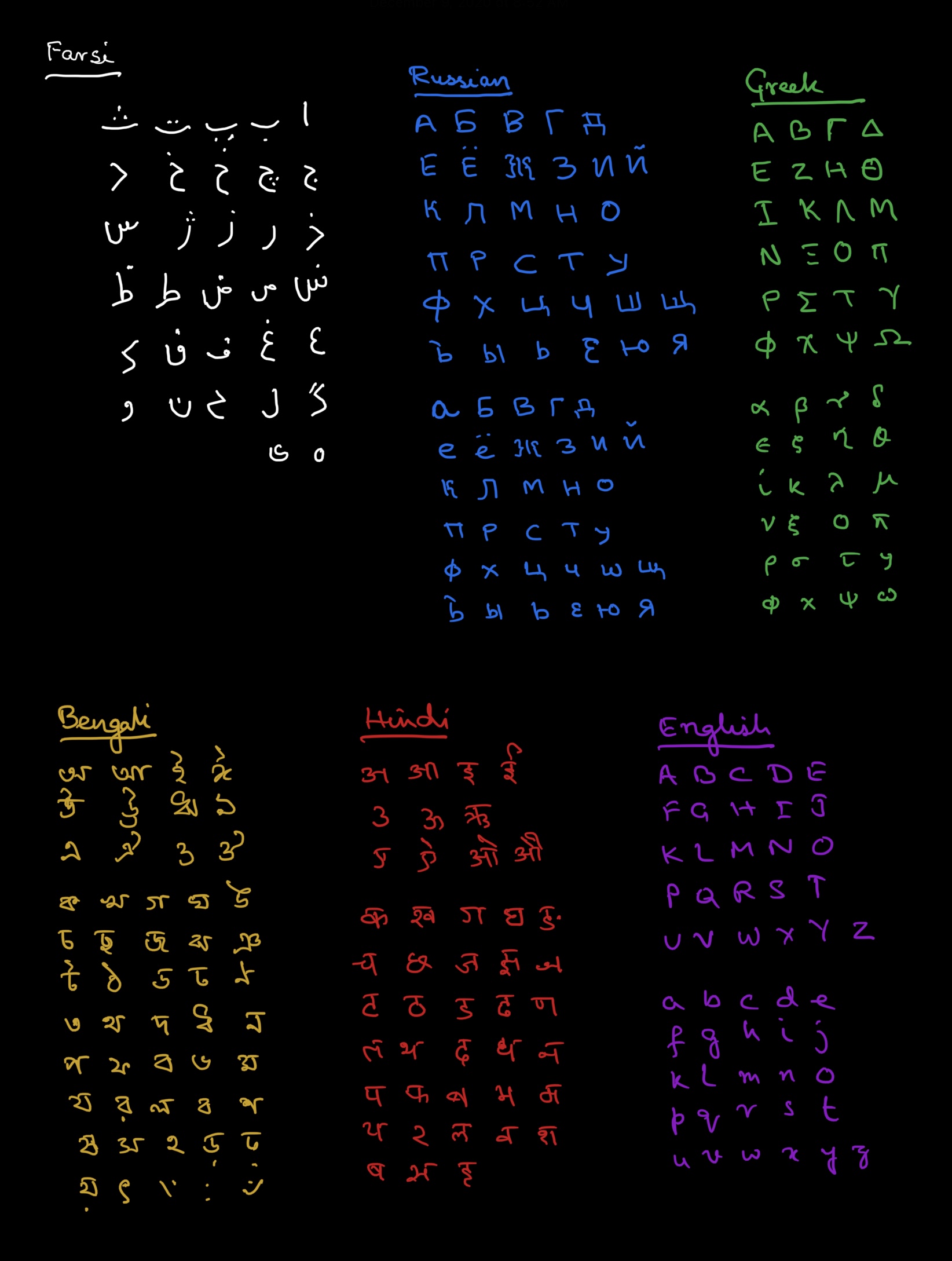