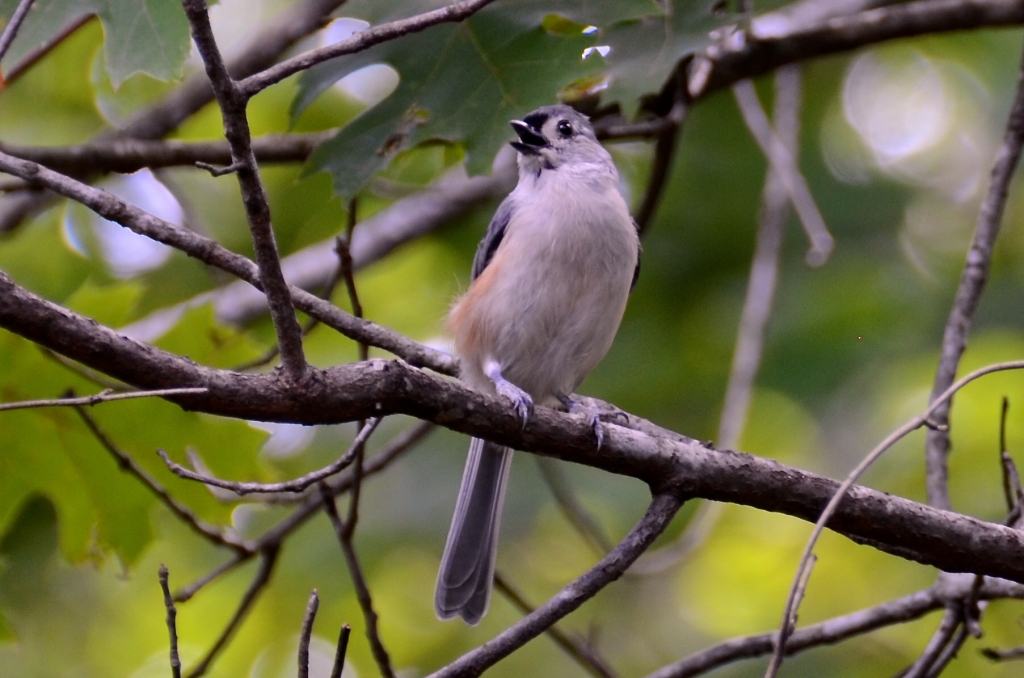 I am quite sure this is called a nuthatch 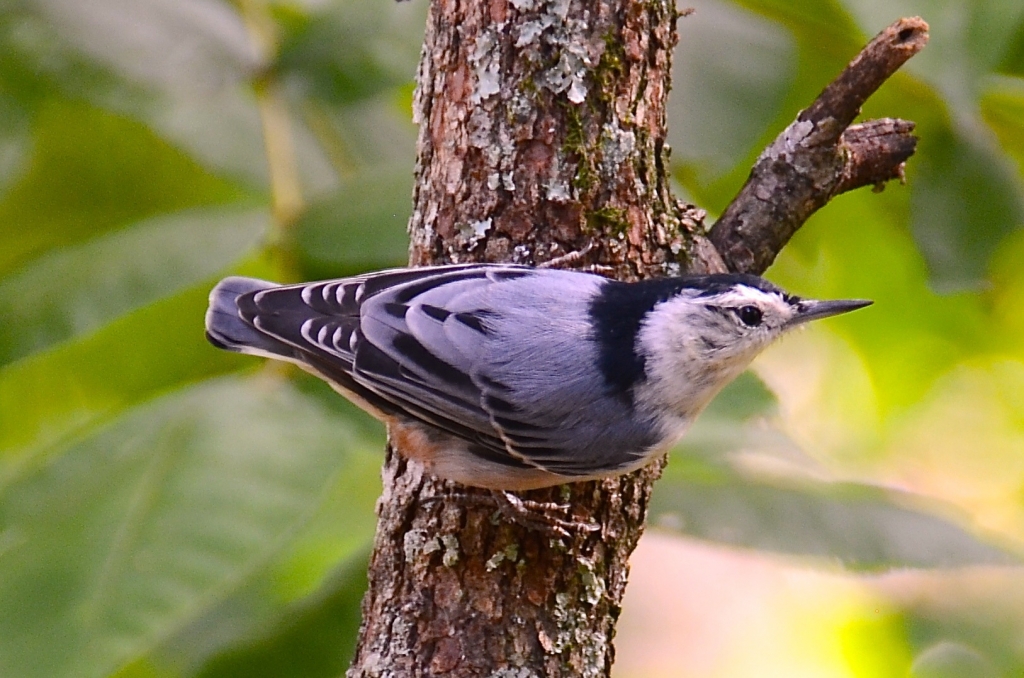 From the bartender’s corner – Sex on the Farm 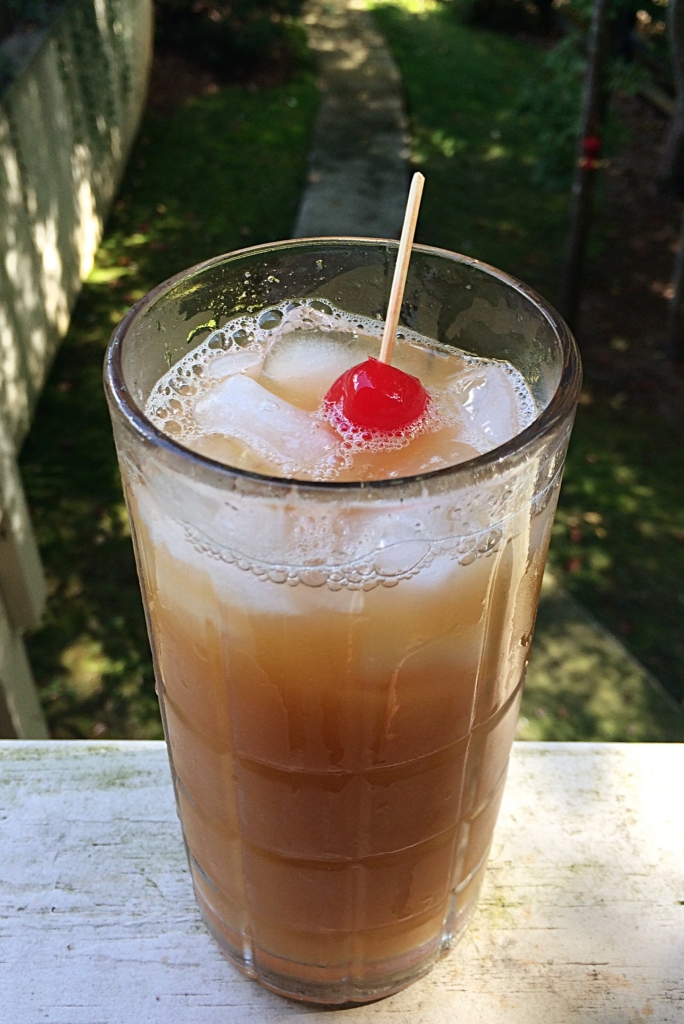 After going for a walk with the Chalu-pa runners every Sunday for a few months before he broke his hip, my father-in-law finally arrived at the last Sunday before he leaves for India. I skipped my run so that I could take him to join the rest of the Chalu-pa group for the customary coffee after run. He walked in hobbling with his stick just as the rest of the group settled down after the run… Was a good last Sunday “adda”! 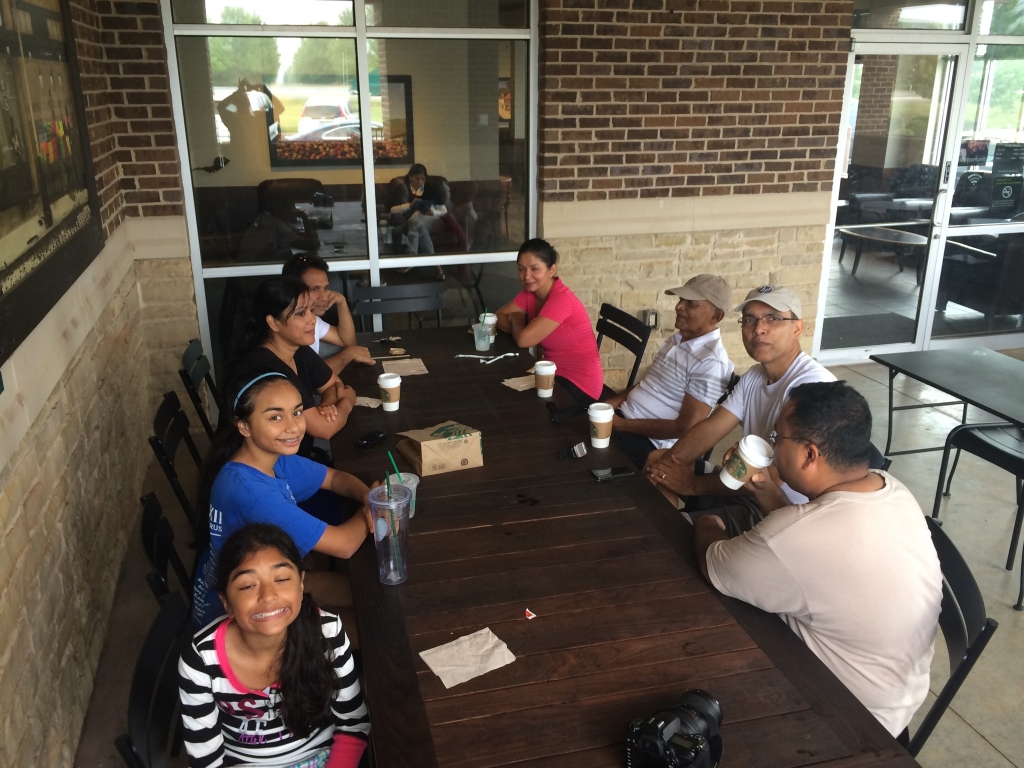 From the bartender’s corner – Blue Watch 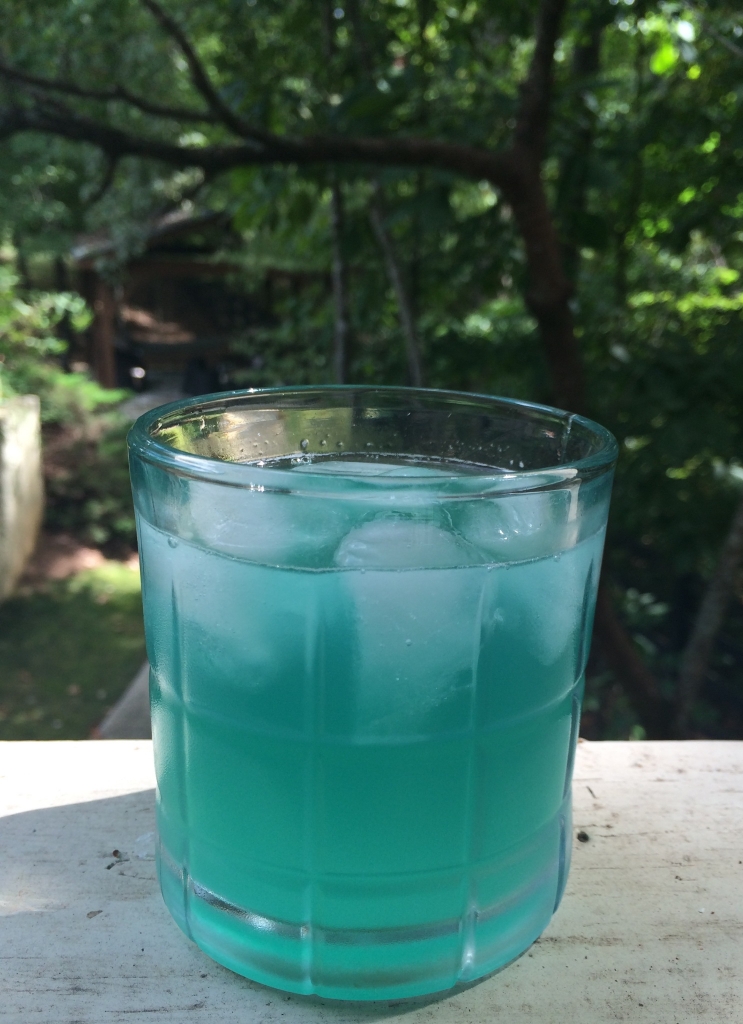 Category: Cocktails | 1 Comment on From the bartender’s corner – Blue Watch

That is enough damage for one day

Trying to fix this nagging issue I have that my FB comments are not getting pulled into my blogsite, I became over-adventurous today. Forgot the good old mantra – if it is not hurting you, leave it alone. Deleted a cross posting app and voila – all my old Facebook posts are gone!!! And it comes with a helpful feature – you cannot undelete! Arrgh! I manually reposted about 20 latest ones back.

If anyone of you care to see my old posts, you can always see it in my blog http://www.rajibroy.com. I have put in a calendar widget and an Archives widget that should help you navigate chronologically. Also, if you want to get to know of my updates, feel free to put in your email id on my blog – you will be notified whenever I put in a new entry.

Meanwhile, I am going to put a stiff drink in my glass and swear off my computer for some time 🙁 Maybe, I will start filling up those hospital and insurance forms with paper and pen 🙂

Category: Musings | 8 Comments on That is enough damage for one day

Surgery can heal your broken bones. But the bureaucracy of filling forms can completely pulverize you. Now that my father-in-law is hobbling around with his stick, I started thinking about what paperwork he might need to carry to see if he can get any of the medical expenses reimbursed in India (he is traveling with medical insurance for foreign trip).

My brother in law promptly sent me a boat load of paperwork. I read a few of them and then looked at some of the information they are asking for. It will be interesting to see how I can even get all those paperwork. Forget convincing the hospital to give me all the detail procedural paperwork – HIPAA be danged – just the forms to be filled up is going to be challenging… if I can suppress my smile at the ridiculousness of some of the fields, that is.

A case in point. Look at the picture below. One of the forms requires the doctor to fill up and sign off on certain information. Even if I manage to explain to him what a Taluka is or why Fax is a mandatory instrument for a patient to have, how do I explain after checking off on “Mr” or “Mrs”, why you have to re-clarify whether you are a male or a female? 🙂 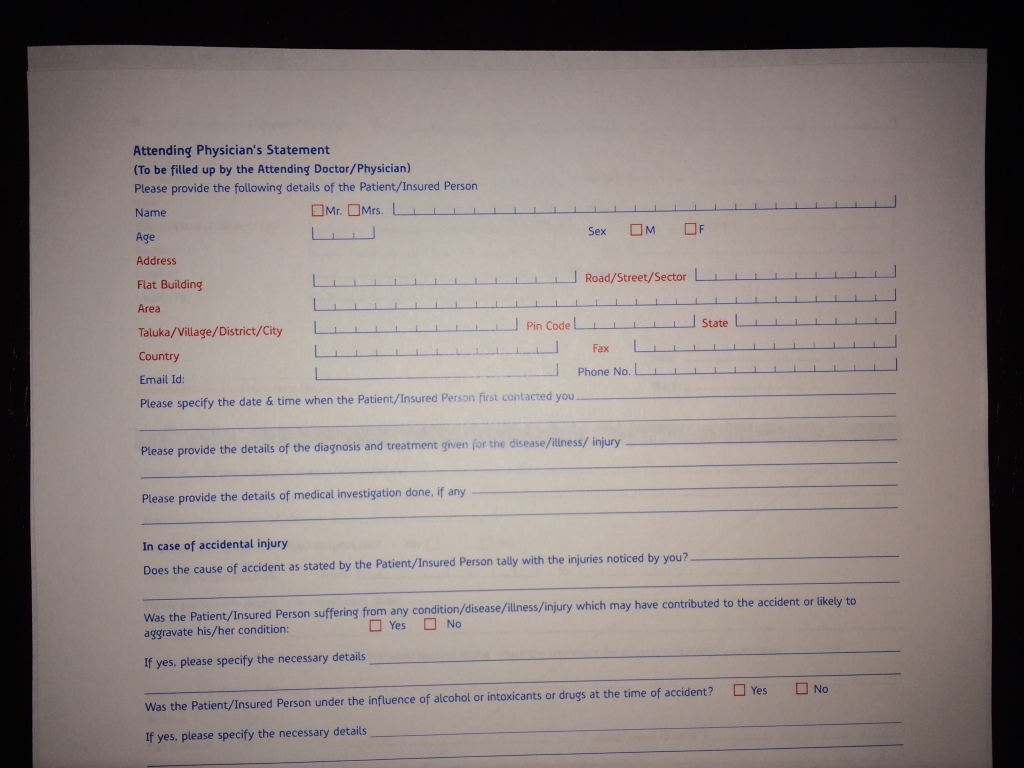 After a tough week on the road, after I came back today, I got a chance to take my inlaws and Sharmila out. The best news of the day was that my father-in-law, who is a lot more reassured of himself when I am around rather than when he is surrounded by four ladies in the house (his words, not mine :-)) gained enough confidence to give up on his wheelchair and walker and managed to go around with just a walking stick!!

My mother in law was so happy to see this improvement that she finally gave in to my pleadings to have a drink with us. Well, she kind of overachieved by having two drinks!!! Wait till all her relatives back in India hear about this 🙂

You can see my in-laws here going for bottoms up!! By the way, that Gandhian haircut my father in law is sporting now? You can thank yours truly for that. Although, I think Sharmila has thrown my old clippers after that hair cutting episode. I can’t seem to find them anywhere anymore. Not that I have any real use for them myself 🙂 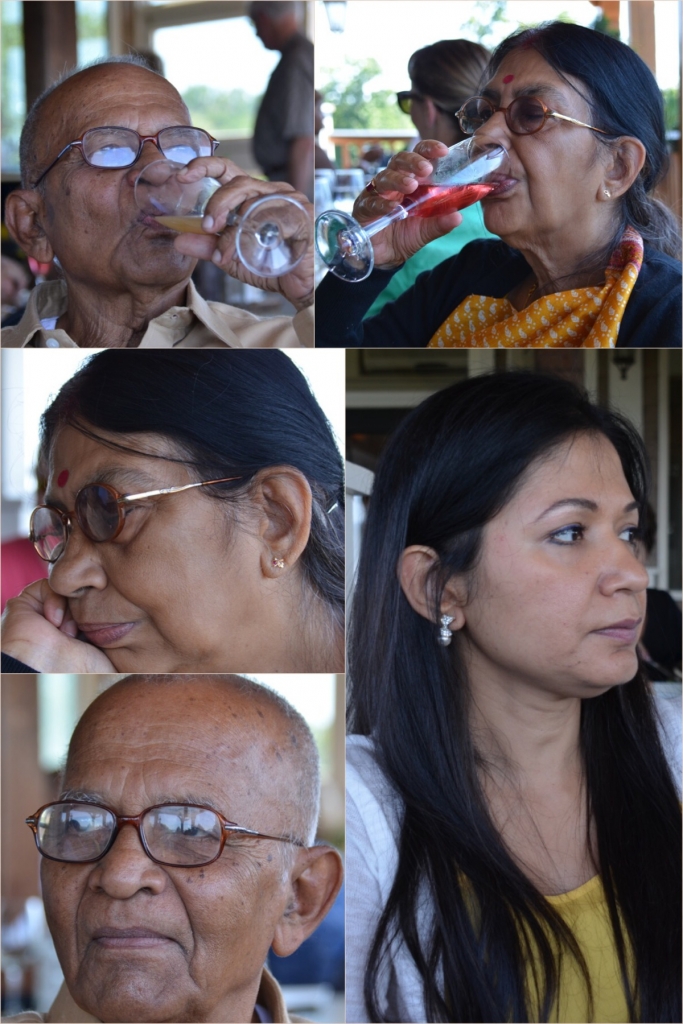 Category: My Family | 3 Comments on Cheers!!

For a belt buckle! No less!

It was not exactly the corner corporate office where the CFO and the CEO intensively pore thru the numbers trying to make sense of the business. Still, there was a lot of business numbers to go thru. So Dan and I pulled into a Chilis outside Milwaukee airport (he had driven from Sheboygan and I had driven from Chicago airport) and settled into a quiet corner ready to have our working lunch and thread thru the numbers.

After a perfunctory glance thru the menu, we put in our orders and everything was going as predicted till our young waiter asked us his perfunctory question “Is there anything else I can get you?”. It has become a reflex action for me by now. “Sure, you can get me a million dollars”. I am really glad that I had that reflex action because as the events unfolded in the next few minutes, I got to make friends with a very driven young man who, I, personally have a lot to learn from.

Back to the conversation with Ryan Spindler – which is what we found out his name happened to be.

By now, Dan was totally into the conversation. Dan, by the way, is the same gentleman who was with me when I found out the connection between him and the bar lady manager from Japan (of throwing the dart fame) as well as he is the same guy who found his college football teammate during a dinner with me. He, I am sure, thinks I am the craziest guy around. Noticing Dan did not think I was wasting his time, I pressed harder to know Ryan a little more.

Me: ” Tell me, if money was not an issue and you could use the million dollars to do something that you are passionate about, what would you do?”

You know, for a young well built gentleman, I was thinking he would talk about adventures, surfing, traveling and such. Therefore, you can imagine my intrigue when pat came the answer “I would open up a Pizza place”.

I incredulously asked “Pizza place? Why? How did you come up with a Pizza place?” And that is when I learnt a little more history of Ryan. He started is career being a Pizza chef and loved it. Unfortunately the place shut down. And he is making a living waiting on tables but his heart is still in making pizzas.

What absolutely mesmerized Dan and me is the ease with which he handled my business questions – “how would you create a differentiation against a crowded mom and pop pizza shops?”, “how would you allocate your capital?”, “how are you going to source your talent?”. At the end of that, both Dan and I were like – “God! Somebody give him a million dollars”!

We had to get back to work though. I asked Ryan to leave us alone for sometime and make sure he met me one more time before we leave. And that is what he did. When he noticed that we were packing up, he got us the check (actually showed us how to use the self-help ordering and check out system Chilis has now at every table).

I handed him my business card and wrote down my personal contacts. I asked him to keep my contact and reach out if he ever needs help. I promised to see if my network could help him and that he should always feel free to get some unsolicited advise from me 🙂 Then I asked him “So, you seem to be a very driven guy. What is your best achievement till date?”

And that is when I got to know that this young well built gentleman you see in the picture tipped the scales over 380 pounds barely six years back. And he fought his way thru down to 180 pounds. He talked about the various frustrating plateaus he faced and how he had to try very different things every time to keep losing weight! Always curious about factors that drive folks to such great results, I asked him “What got you started?”.

“Oh! many things. Most of them very petty”, he said.

“Tell me one so I can feature it in my blog”, I pleaded.

And that is when I got to know another facet of Ryan. Evidently, he likes Indie and Rock music. And he likes wearing jeans and tucking his shirt in so that the belt buckle would show. He evidently loves large belt buckles!! And one fine day, he realized that his gut was overshadowing his entire belt buckle. And that was when he drew the line!!!

I could only say “Wow!” as I wished him the very best and bade adieu.

So, if any of you happen to be near Milwaukee airport, swing by the Chilis nearby on 27th street (there is only one – next to the Home Depot and I think the town there is called Franklin), to say Hi to this driven young gentleman and wish him all the luck!! 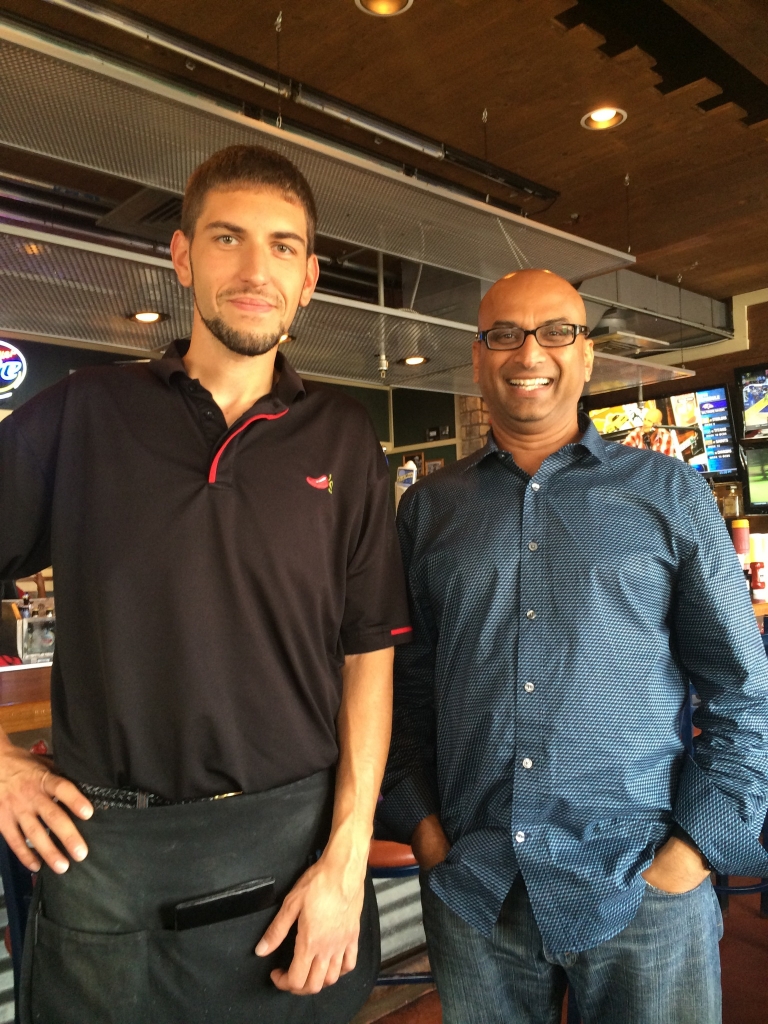 Category: Intersection Points | 1 Comment on For a belt buckle! No less!

Found in the restroom…

Some graffiti (vandalism??) on the bathroom door in a totally nondescript pub outside Milwaukee airport where I was meeting one of my office colleagues to review business. Real funny part – look at the total count 🙂
The obfuscation of the S word was my contribution. 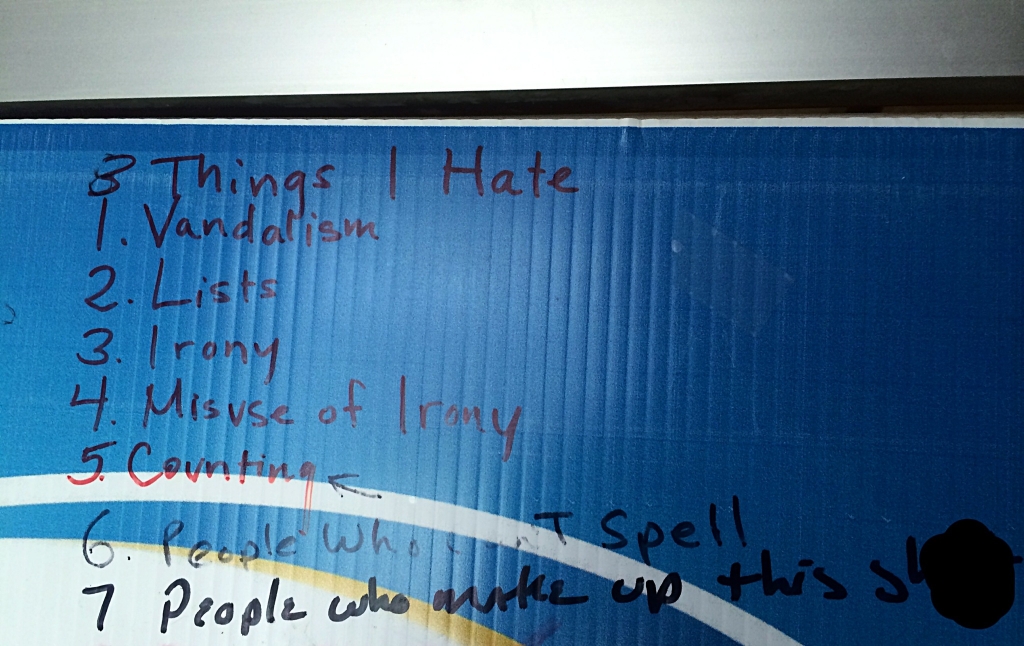