The trees I talked about yesterday..

Remember the skeleton like silhouette against the bluish pink eastern sky I talked about yesterday? Captured one of them during today’s run.

I thought I was the only one in bright neon clothes this morning. Ran into a running group with equally bright colors. It is difficult to recognize people what with all the head gear and all but I think the lady who said Hi to me was Lia. If so, I need to ask her whether I caught her on her 20th mile or 40th mile 🙂 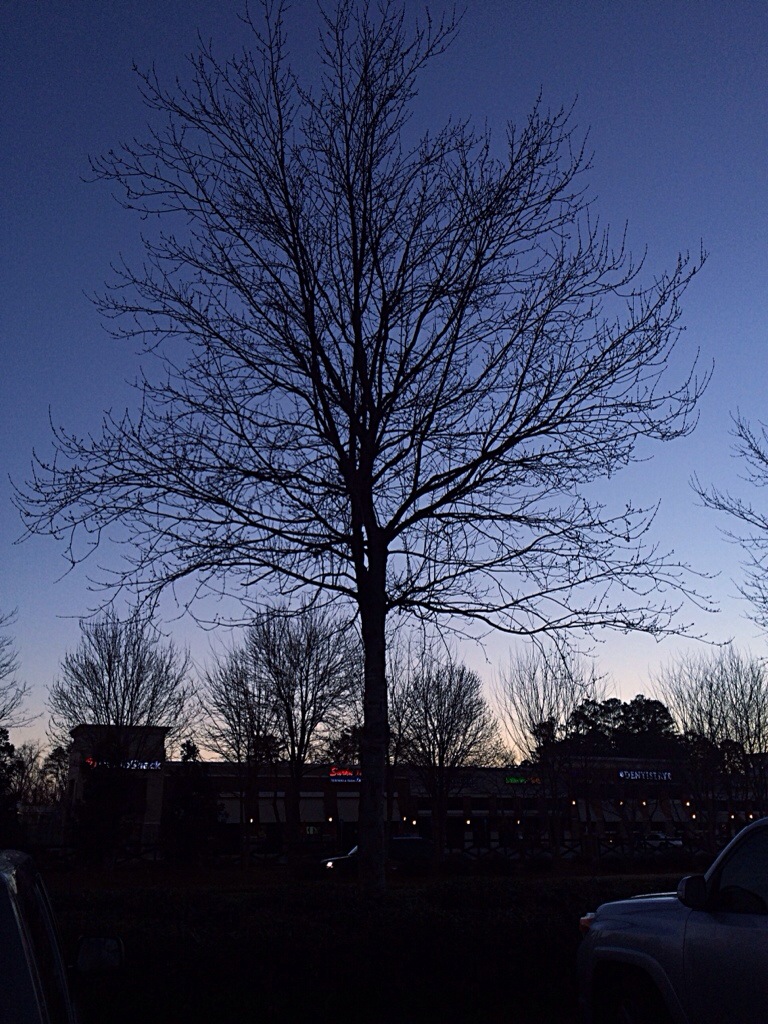 Thursday evening. No flight today. I got done with it on Monday. But still there is a puzzle…

Mary would like to go out with John but John did not care much for Mary. So Mary agreed to play a guessing game with him. John asked her to guess the apartment number that he first lived in. He let her know it was between 8 and 100 (both inclusive). But she had to guess with as few questions as she could.
Her first question was “Was the number more than 50”?
John answered the question. But what Mary did not know is that he lied. (he really did not care to go out with her).
Mary then asked “Is the number divisible by 4?”
John answered that question. But once again, he lied.
Mary thought for a while and asked “Was it a square number”?
This time John answered the question truthfully.
Mary excitedly asked her final question “I know the exact answer if you tell me if the number started with 3 or not”
John answered that question too. But we do not know whether he was telling the truth or not.
At that point, Mary proceeded to guess the apartment number. As you can imagine, she got it wrong. (After all John lied at least twice).
Now, can you tell me what was John’s apartment number?
Category: Puzzles | 13 Comments on New Puzzle

The in-thing in fashion these days..

I had gone to get my left knee checked today. More of a preventive action than any long term pain or anything. There is an occasional pain and I am worried more about the mechanics than any structural issue.

In any case, I was asked to get a quick X-ray before meeting the doctor. And then I was ushered into the X-ray area. The lady took me to a room and asked me “take your trousers off, put in these paper shorts and keep everything else on”!! Those shorts are actually made of paper!!

As I pondered over getting papyrusly clad, I wondered what she meant by “everything else on”. To play it safe, I kept my jacket as well as dress shoes and socks on!! Evidently I was not the only one with this ridiculous look. As I stepped out, the whole corridor was a veritable Versace fashion show of people milling around, all dressed up to various levels of hilarity like me!! 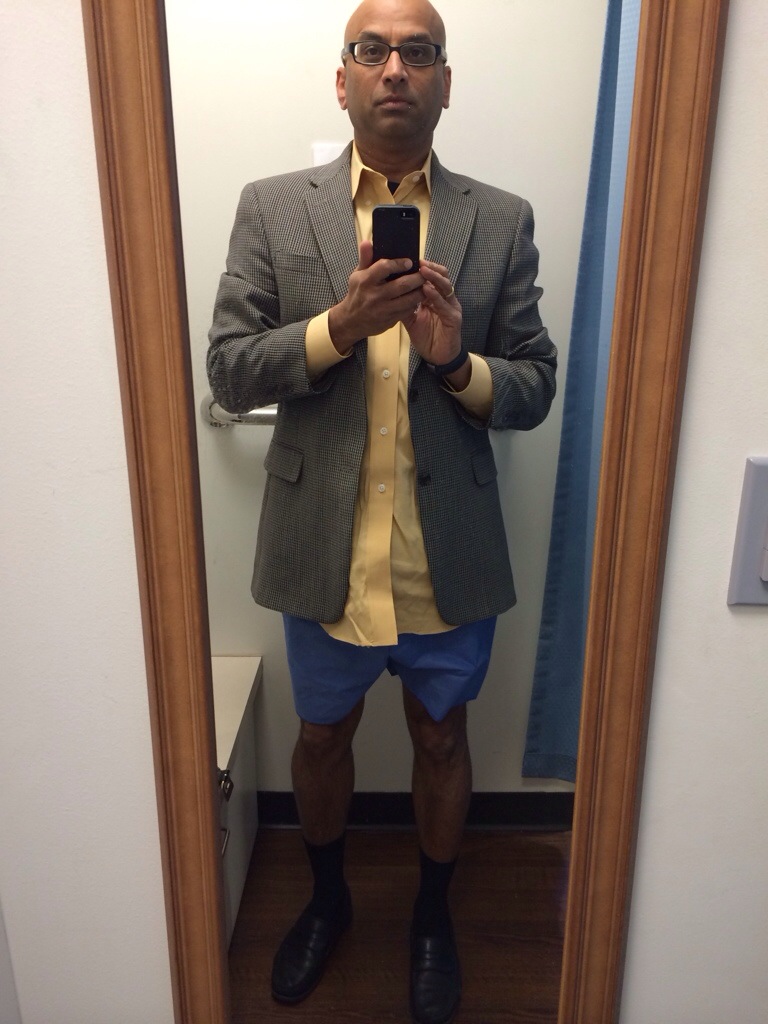 Category: Humor | 38 Comments on The in-thing in fashion these days..

There is only one way to do full justice when you describe the sheer exhilarating feeling after running a few miles in sharp biting cold weather (mid twenties) with sharper winds slashing in your face amid the alluring natural beauty of pristine hills with dry barren trees giving a skeleton-like silhouette against a blue-pink eastern sky.
And that is – “God! I am so freaking glad I got it over with!” 🙂

Why I don’t mind my crazy travel schedule

This week, I had to dash to DC for a few hours for a last minute engagement. Landed at National airport on time and hailed a cab to go to the city. We had barely left the airport when the cab driver looked at me and with a heavy accent asked me if I was from India. I know there is an inherent irony in an Indian guy claiming somebody else having an accent 🙂 In any case, I replied in the affirmative and the following very interesting conversation unfolded…

Me: “You know, I come to this city at least 20 times a year. I always meet cab drivers from Ethiopia or Eritrea. You don’t seem to be from there. Where are you from?”
He: “Afghanistan”
Me: “Afghanistan?”
I was surprised. I wanted to discuss politics in Afghanistan but was wondering how to ask him – not knowing what his reaction might be.
Instead I asked “Do you know Ahmad Ali”?

Me: “I think he is a singer from your country. He has an amazing voice. He sings in a language I cannot understand. But I love the tunes”
He still did not know what I was talking about. So I gave a few more details…
“He plays the harmonium with his left hand on the reeds. Also, he always sings in a suit. With a tie on”.
He looked back and yelled: “You are talking about Ahmad Wali?”. I suddenly remembered – indeed the name was Ahmad Wali. He pronounced Wali in a slightly different way but I was more taken aback by his loud voice. You could see that he was excited.

He: “How do you know about Ahmad Ali? By the way, that language you cannot understand is called Pashto”.
I figured that must be the name of the language that Pashtuns speak in. “Oh! I am not sure. I think I came across a video of him in YouTube and then I searched more video and songs of him”.

In the next five minutes, I finally understood why he was so excited. The cab driver knew Ahmad Wali personally! They learnt music together!! They went to Habibia High School together!!!

Fascinating story! Both of them escaped from Afghanistan around the time the Communist coup took place followed by the Soviet Invasion. They went to Pakistan and then to India. He was in Delhi for a year and then immigrated to US. Later I found out from Wikipedia that indeed Ahmad Wali had gone to India on a forged passport and then immigrated to Germany. Evidently, while in Afghanistan, he was a cop!!

Back to my cab driver, he fished out a CD from his glove compartment and then put it in the car stereo system. You could hear a young kid singing in a very beautiful voice. “Is that Ahmad Wali when he was a kid?”, I asked. “No!”, he retorted, “that is me”. Evidently many many years later he went back to Afghanistan and went to Radio Kabul office. They pulled out his old songs that had aired and made a CD and gifted it to him!

We discussed at some length how many of today’s musical instruments in India have common roots with the instruments in Afghanistan. He had some very interesting stories also about how those instruments were initially discovered. I was a little incredulous but it was not entirely outside the realm of possibility.

Unfortunately, our trip came to an end. I did not get a chance to ask him why did not try to follow music as a profession in US (as Wali did in Germany) and why he is still driving cabs well into his sixties.
In fact, I wanted a picture of him but there was a long queue of people waiting to jump into the cab moment I got out. I asked him for a card – he did not have any. So I gave him mine – hope he will write back…

Category: Travelogs | 24 Comments on Why I don’t mind my crazy travel schedule

Where is the bright goal line?

Yesterday, while visiting my doctor, I heard something that made an impression on me. We were discussing my theory of splitting up our retirement period and taking long time offs multiple times in our life and pursuing other interests than work. My doctor himself regularly takes time off to go serve in Haiti, Honduras etc.

He told me a story of an old friend of his who had put this in a great way. Evidently, what he said was that he did not need a lot of land. He just wanted to own the properties adjoining his!!!

That is an awesome picture of describing a never ending goal!! Had a hearty laugh!!

Category: Musings | 1 Comment on Where is the bright goal line?

The wind was making it real cold. Managed to avoid the rain though. We need to get spring here quickly.
One full week of back to minimalist shoes. Left knee still under observation. Strangely the pain is far less if I increase my speed – not decrease. All that is fine and dandy – but that merely shifts the problem from my knees to the heart and lungs 🙂

Got this in my Linkedin update. I have been scratching my head trying to figure out one thing – “Isn’t this the whole point of taking medicine to begin with?” 🙂

For my Bengali friends…

Disclaimer: This is not an original. Received this from the internet. 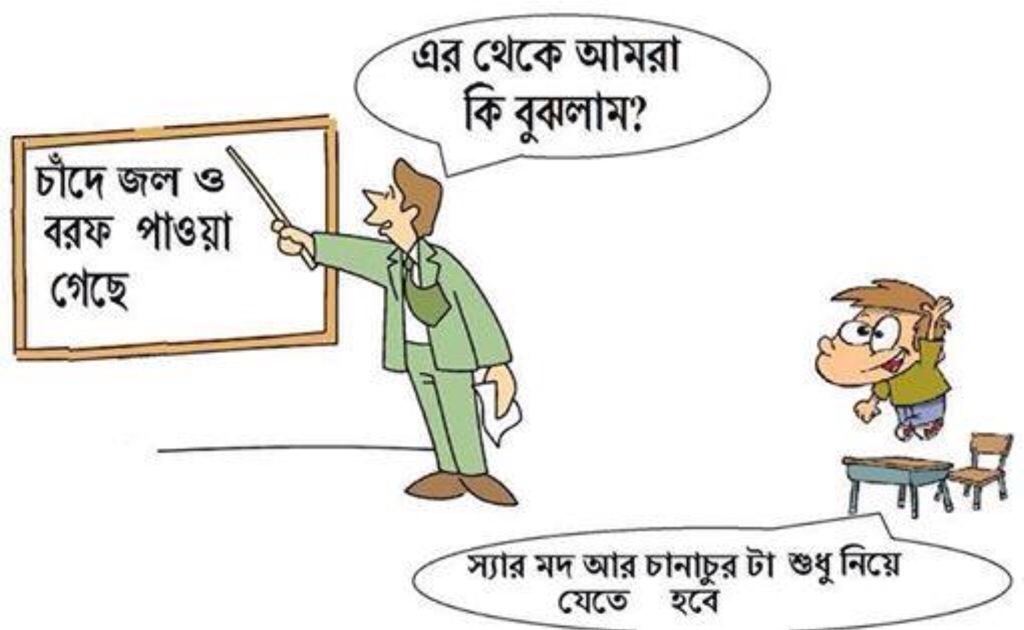 Category: Humor | 2 Comments on For my Bengali friends… 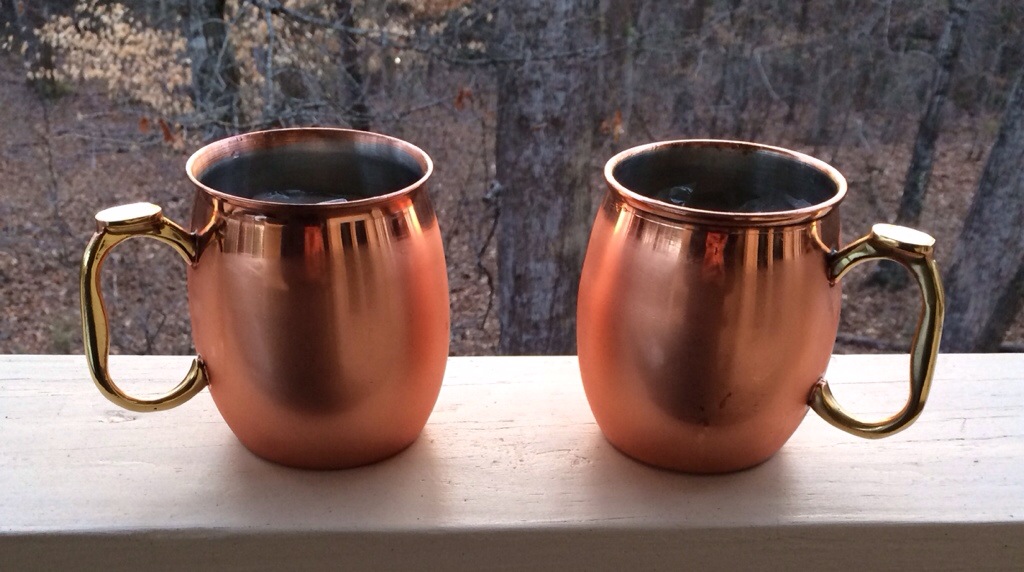