The other 4 ounce spilled over!

Hmmmm… Look at the name of the product I ordered. Now look at the specs for size written a little below !!!! You think they might be making a mule out of me? 🙂 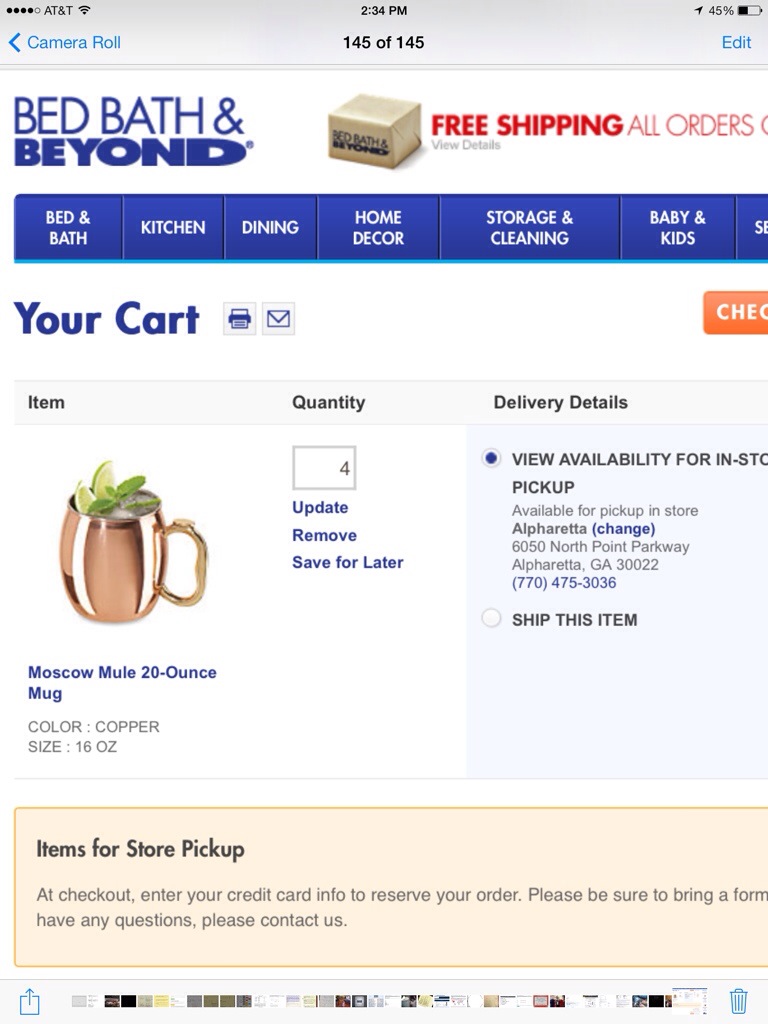 Category: Our Friends | 5 Comments on The other 4 ounce spilled over!

This week’s trip is over. Time to leave Florida and start skidding on icy Atlanta roads. Also time for a puzzle.

Many of you are aware that my current job involves catching fraud in online transactions. We of course focus on building systems that can catch maximum amount of fraudulent transactions. However, what you may not know is that an equal challenge in building these systems is making sure that we do not flag the good transactions as fraudulent (and irritate the good customers). This is always a tough balance. This is also called the “false positive” problem. (The test showed “positive” but that is a false result).

You also know that 0.5% of the village population has been indeed afflicted by the disease.

Your friend from the village just received a report that he has the disease.

How concerned should he be? What is the real probability that he has the disease?

Sharmila sent me a picture of snow starting to accumulate in Atlanta. I was missing the cold and snow so much that I had to sent her a picture of my poor condition as of now (we get this afternoon off during the company event). She is not talking to me now!! 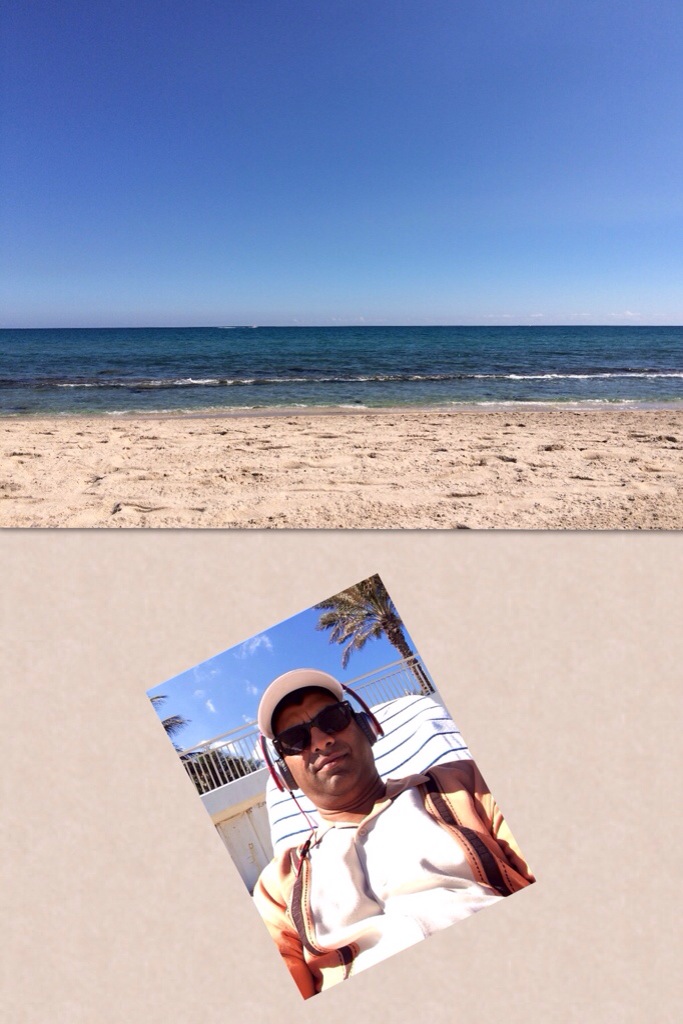 Since when we did we get more control of our happiness?

“Most of us make at least three important decisions in our lives: where to live, what to do, and with whom to do it. We choose our towns and our neighborhoods, we choose our jobs and our hobbies, we choose our spouses and our friends. Making these decisions is such a natural part of adulthood that it is easy to forget that we are among the first human beings to make them. For most of recorded history, people lived where they were born, did what their parents had done, and associated with those who were doing the same. Millers milled, Smiths smithed, and little Smiths and little Millers married whom and when they were told. Social structures (such as religions and castes) and physical structures (such as mountains and oceans) were the great dictators that determined how, where, and with whom people would spend their lives, which left most folks with little to decide for themselves. But the agricultural, industrial, and technological revolutions changed all that, and the resulting explosion of personal liberty has created a bewildering array of options, alternatives, choices, and decisions that our ancestors never faced. For the very first time, our happiness is in our hands.”

Category: Musings | 4 Comments on Since when we did we get more control of our happiness?

Another guy I was able to spend an hour and a half this week was with a long lost friend – Kondal! We worked together in my first job in Bombay back in 1991-1993. Had a fleeting glimpse of him and his family a few years later at a restaurant. Was able to sit down and chat after a long long time. I still marvel at my friends from my first job who stayed true to their love of technology. He is surely one of them – and I have lost all ability to code these days… He was waxing eloquent on “cloud” and I was wondering if it might rain in Dallas 🙂

It was simply wonderful seeing him after such a long time and catching up on so many people he has kept up with and I have not…. 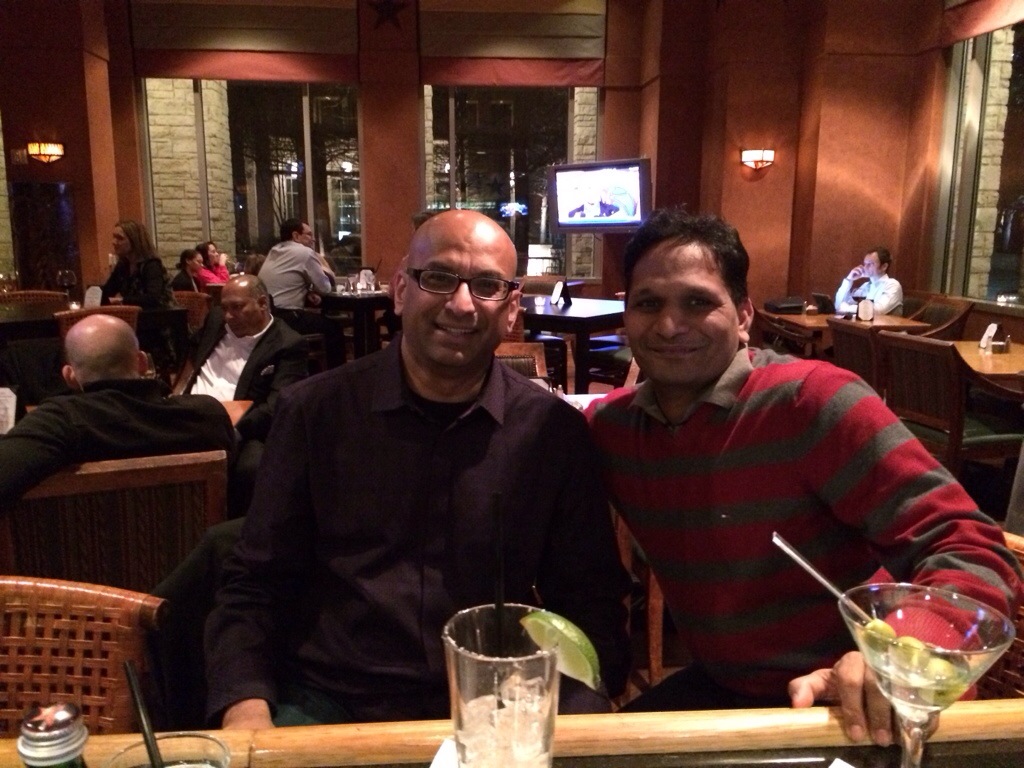 A few brave souls showed up for the Bengali Chalupa run this morning. It was in mid twenties … 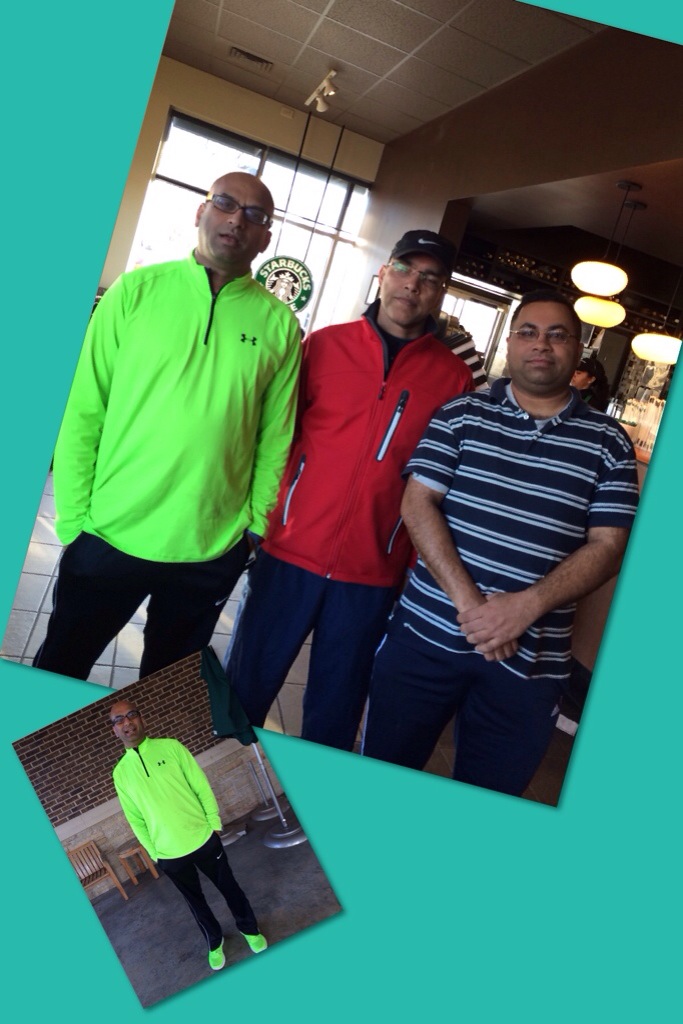 It was a little late by the time the meetings ended. But that did not deter a couple of my friends and their families to come and meet me. Subrata and I went to middle school together. Nirmalya (much younger than me) used to play together with my brother and myself and other neighbors every summer when he visited his uncle – who was my neighbor! The last time I saw his daughter was when she was barely standing up in his apartment. Now she is a sixth grader!!

That was one of the best Indian food I had. And certainly the most awesome “adda”!! Also, I can’t remember the last time three forty-something Bengali guys sat down with so little hair to show for themselves 🙂 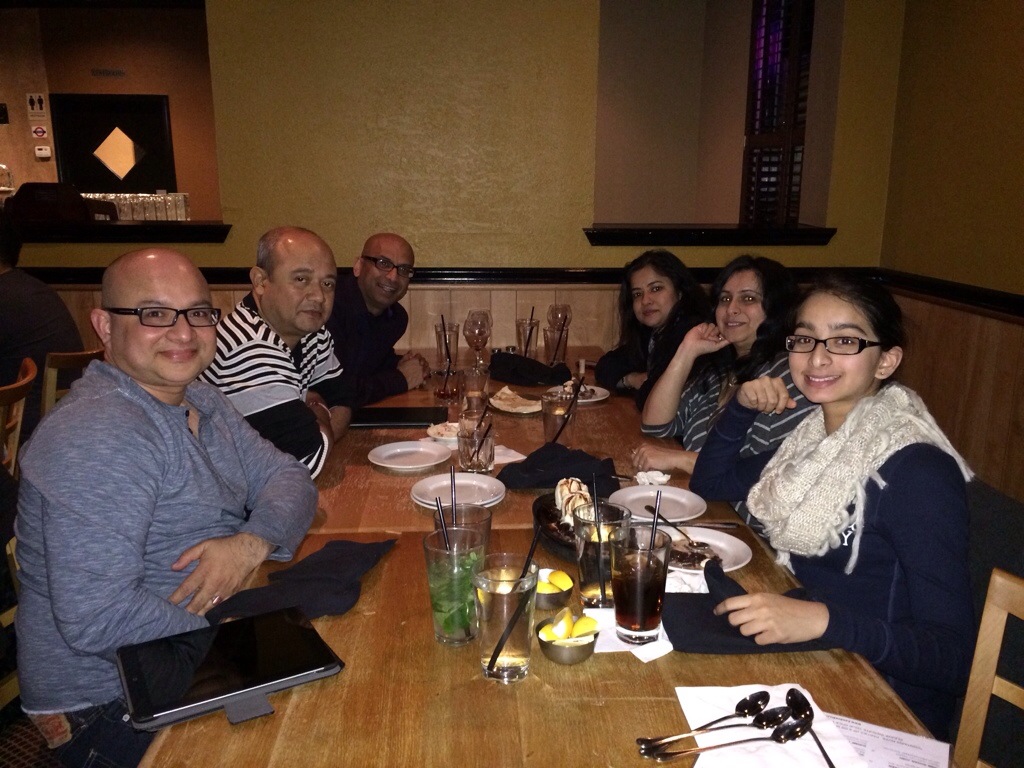 After the Tech fair competition, on our way back, Nikita and I stopped at a Starbucks. The entrance to the Starbucks was a little convoluted. On our way out, we got stuck. After pulling out of the parking spot, I could not move forward since there was a car there waiting to move who was waiting for the car in front to move who could not take a right turn because another car was blocking the way trying to come in. And that car could not move either since there was a car in front of it who wanted to get into my parking spot. But it could not do that till I cleared out!!

So, I explained to Nikita that in computer science, this is what is called a “deadlock”. Nobody could move since we had a circular dependency. Eventually, all the drivers realized that we have an unsolvable problem. It was solved when the car wanting to take a left turn, decided instead to go forward into the Drive Thru lane.

As I finally pulled forward, Nikita asked, “So, are we Liveopen now?”.

At Westlake High School in Atlanta. Niki was sent from her school for a Technology Fair competition. It is amazing to see the talented kids. Some of the parents – umm, not so much.

Okay, admittedly, there is some confusion about room assignments. (Niki was shifted twice). And some are running too close to their allotted times. But what is the big idea yelling at the volunteers? For the record, the volunteers are going out of their way to be helpful. One even loaned his laptop to a competitor whose laptop crashed.

It is terrible how such seemingly bright students are picking up the wrong examples of how to treat other people.

In any case, here is Nikita setting up her project…. 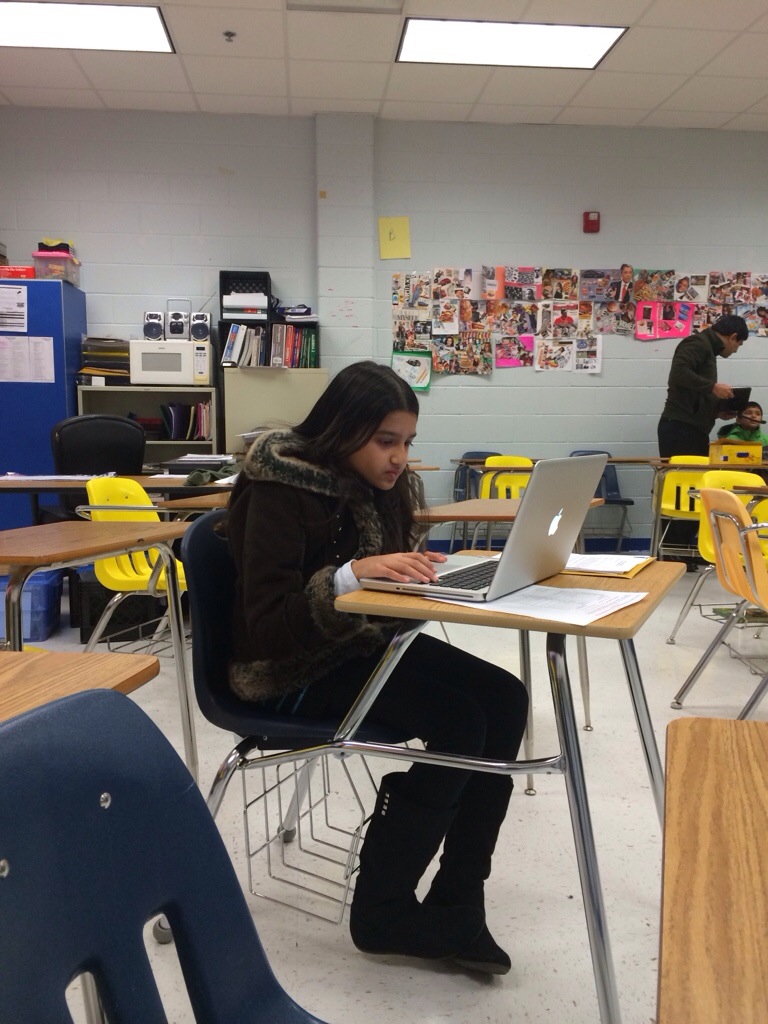 Remember yesterday how I ran into an old friend and sat down for a cup of coffee in the terminal before we split? There was a very interesting side story that happened at the cafe that I never mentioned.

Tom and I sat down at the first cafe we could find – actually it was a bar – and he ordered a diet coke and I, a coffee. As we finished up our chatting, I asked the guy at the bar – who seemed to be our age – if he could do us a favor and take a picture on my phone. You could see that something was not right. He took the phone and had the screen facing us. He asked “which buttons do I press? I do not have a cellphone. I do not know how these things work”. Just as I started saying “turn it the other way and press the big white circle on the screen”, a fellow passenger on my left offered to take the picture. And that is what we did. That is the picture you saw.

Totally amazed, I went “Wow! We will need to drag you to the twenty first century one of these days”. And the lady on Tom’s right yelled back – “No. Let him be there”. Evidently, a lot more people think of cellphone as a nuisance factor. Just when everybody in America is thinking of getting out of landlines and have a cellphone only….

Unfortunately, we had to leave soon. I had a office meeting coming up. Tom had a flight to catch.

I am going to go back to that cafe and find that guy out. I have a lot of interesting questions for him. I am sure he has some cool stories.

If any of you go to Atlanta airport, check out Cafe Intermezzo in Terminal B (it is near the center of the terminal) and ask for Jason. You can identify him by his shoulder level hair. I have no doubt he will regale you on why he does not want a cellphone…