On Feb 27th, 2010, I ran the 30th Charles Harris Run for Leukemia. Charles was my friend Scott’s dad. I ran for charity after a big gap of almost 4 months. It was a 10K and there were almost 1600 runners. Nice course with only a couple of hills.

Did a PR of 54 minutes, 19 seconds. That is more than 5 minutes off my previous PR. Negative splits helped. Details of the day below… 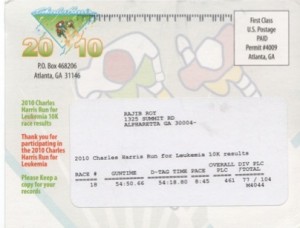 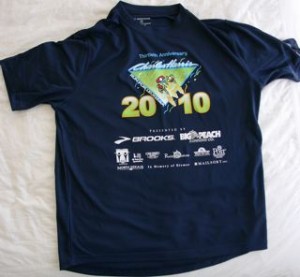 As I saw it…
I had not run in charity for almost 4 months. And then jumped on to a 10K run. This was in memory of Charles Harris. Charles played for New York Titans (before Jets) and Cleveland Browns. That was a long time back. That was when they did not wear helmets in NFL games! Charles was lost to leukemia 30 years back.

Charles’ son Scott is a good friend of mine and we live close to each other. His wife Denise works in the same group as I do in Equifax.

This explains how I got the chest number of 18. I am neither a Speedy Gonzalez nor did I pre-register very early. In fact, just yesterday Denise asked Scott to make sure I am registered.

It was a cold freezing day with a lot of wind. It was so cold that most of the runners were crowded in a hall to stay warm. Needless to say, I was totally bundled up. But there were runners in shorts and half sleeves. How they survive, I have no idea.

Anyways, it was great to meet Scott’s brother Charles (Jr), his sister and their family. They do this every year for their dad.

I had forgotten how great these runs feel. It wasn’t like I was trying to win the gold medal. But watching people of all ages and color and creed come out on a cold morning and pay money just to get a chance to run together, get a free T shirt, may be a banana or two – but above all be united in the spirit of celebrating life and defeating the causes of death – there is no way one cannot get an adrenaline rush. Just the spirit of it all would shave off a few minutes off your run.

There were these kids who ran past me very quickly and then got distracted by a dog watching them. They stepped off the run, petted the dog, had fun with it and then came back to run. Needless to say, they speeded past me the second time!

After I finished (almost dying) at 54 minutes and change, I met up with Scott and Denise again. (Scott finished in 46 minutes and change). I was introduced to this gentleman Michael who turns out is the neighbor of another colleague of mine from office. He was talking of his birthday party yesterday. He turned 50. And I am like – wow! I wish I can be in that shape when I turn 50. He mentioned how his wife warned him at 1 am that he is partying too much for a 10K run the following morning. And I am like – wow! you party, drink and then in a few hours come out to run. You are a good guy.

Of course, had he not finished in 41 minutes flat, I would have been very embarrassed 🙂

Well, I picked up my T shirt and then started for home. As I drove down the road, there were still a few runners finishing. There were some really elderly people – at this point they were only walking – not running. There were people out there waiting for the last person and cheering them up. There were the cops, ambulances etc at the end picking up the cones. They still had a couple of miles to go. Probably 30 more minutes. Back in the hall, the winners were being announced already.

As I stood at the traffic light, I was lost in my thoughts – These folks would rather walk slowly to the end than step aside and give up. And everybody was waiting there cheering them to the finish.

I realized that is what the human spirit is all about – Not Giving Up!!!

Saraswati Puja is the celebration of the goddess of education and music in India. In Bengal, we tend to celebrate it sometime in Jan or Feb. This time, in Atlanta, like every year, we had a great program for the whole day. Niki and Tasha danced. Niki was trained by Mayuri Ray and Tasha by Indrani Kar. Sharmila, of course was in charge of getting decked up and chatting up with old friends. And I stuck to my routine of showing up for my two responsibilities – eat lunch and take video of the kids’ dances. 🙂 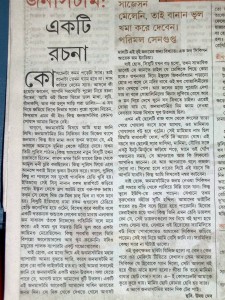