What you will not find in the manual

After a considerable number of years of running the risk of being called an Amish, I finally gave in and bought an Apple Watch. I am not entirely sure why.

I was in the store to buy an iPad for Sharmila and a laptop for Nikita. But I came back with an Apple Watch. For the curious, I did buy their stuff too – even I am aware how to keep peace at home. That awareness, admittedly, has grown over an intense period of trial-and-error, if you know what I mean.

Coming back to the watch, in the last few days, my life has dramatically changed. The most noticeable change is what happens to me when I receive a call on my iPhone. It used to be that every call would be followed by me screaming around “Where are my Airpods? WHERE ARE MY AIRPODS”. (I had to scream louder the second time since, more often than not, they were still in my ears). But now, I inexplicably keep yelling at the watch. And it works. But I am a sight holding my wrist up and talking at it.

In the store, I had a flashback of my last annual physicals and I believe I convinced myself that I need to track my health statistics to stay … well, healthy, I guess?

So, this Apple Watch of mine ostensibly tracks how many steps I take. And I have to reach 10,000! None of your “small step for you, giant leap for mankind” bullcrap.

Guess what? I am now fixated on that statistic. There is an extra weight in my gait. Instead of treading lightly – or at least, normally – I am stomping all over the place. I am morbidly afraid that the watch might not pick up a step here or a step there.

I am even sweating over whether I should move my watch from the left wrist to the right wrist. Maybe, being a right hander, the watch will be more sensitive to movements from there. Interestingly, there is also a helpful app on the watch to detect stress level. That seems to go up every time I worry about counting footsteps.

Of course now I am confused, on the whole whether I coming out ahead or behind.

Oh! Did I tell you about that sleep app? Reading up on the stress app, I found out that I need good sleep to reduce stress. You guessed it – there is an app for that!! So, every morning, instead of brushing my teeth first, I am lost in analyzing my sleep and all the times I apparently tossed and turned.

Between you and me, those have gone up dramatically ever since Sharmila came back from India. Undoubtedly, I am merely reflecting on the correlation without even remotely suggesting any causality.

Here is the funny part. Every morning, I wake up with a good and cheery mood like every single day in the past. But now, I realize from my watch that apparently I did not have a good sleep. Looks like I tossed and turned. And something about REM that was not very REM-like. Suddenly I feel so tired and exhausted!

I think I have this cause and effect thing mixed up. Sure enough, the stress app starts doing its antics when I realize this!

Being a technology neophyte, I have to admit that the allure of that brilliant screen and all those small colorful things trying to tell me something is intoxicating to me. They have all these apps I can put on the screen. They are called “Complications” – score one for Apple for telling the truth. Apart from being technologically challenged, I am not the one with any nose for aesthetics. If you leave it to me, I will jam in all those small icons in a neat column and row arrangement 🙂

Right now I have put so many stuff on the screen that it resembles more like the interior of a cockpit. I am fairly sure a couple of Complications more and I can land a rocket in Mars from my new watch. And I am constantly thinking about “What else should I be interested in that I can put on the screen?”. It harkens back to my TV watching days when I used to be too busy flipping channels constantly to really watch anything. It was like while the whole world was wondering what was on TV, I was preoccupied with “What else is on TV?”.

One final observation. I love how the watch detects that I am trying to look at it. I learnt that the accelerometers (I have no clue what they are – but I am sure they are very smart. Is this that Artificial Intelligence everybody has been talking about?) detects how I am moving my wrist to face my eyes and stop there – and bingo! that means I am trying to read my watch. Once I learnt about it, of course, it became an incessant battle between artificial intelligence and (allegedly) natural intelligence. I am constantly trying to fool it. I have tried slowly moving my wrist (it still detected), moving my wrist around a few times like a wand and then stop (it won), looking at it askance (it still won) and what not. I once even tried doing it while keeping my eyes closed. I am not totally sure who won on that one.

For all that, I will tell you what has not changed. Every time I need to check the time, I am still reaching out for my iPhone and checking it there !!! 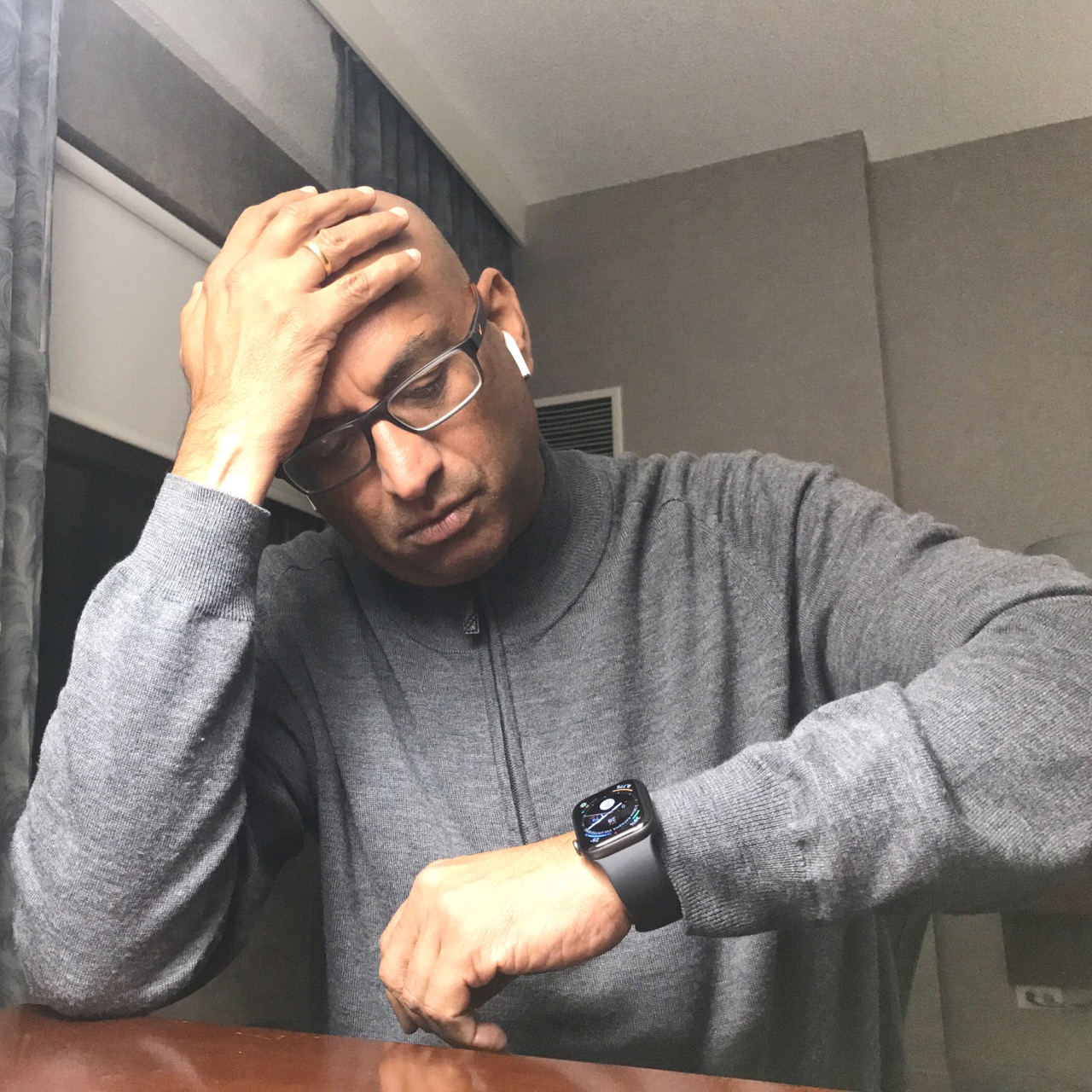 I just noticed this on my browser bookmarks…

What is wrong with this picture? Notice the Facebook logo.
How did this happen?

You know it is November…

If I were a journalist…

“Kotha thekey beraatey esechhen?” I asked casually. (I enquired where they were visiting from).
“Philadelphia,” replied the gentleman, taken aback by somebody speaking Bengali in a free shuttle bus that carried us from the resort in Punta Cana, Dominican Republic to a nearby marketplace.

You see, Amitesh, Anusuya and I had run out of wine for the evening (I totally blame Anusuya for this 🙂 ) and needed to replenish the same. The daughters opted to stay by the pool and we three got on to the bus. As I got on, I heard the gentleman talking to his wife and two young sons in that unmistakable language that I grew up with in my early childhood.

Once the ice was broken, the seven of us chatted for quite some time. As you might have imagined by now, I was busy finding out intersection points. There were way too many. I think, it all started with me mentioning that both my daughters were born in the Dallas area. Quickly found out that Sumana (the wife of the aforementioned startled gentleman) was a relative of Debjani. To put this in perspective, Sharmila and I were very very close to Debjani and Subhasis (Subho) when we were in Dallas as our kids grew up together. In fact, we exchanged some great stories of Rishi (Gampu) – one of which involved his teacher asking Debjani if they had a pet duck! Story for another day!

Indrajit (by the method of elimination, you have no doubt figured out that he was the startled gentleman) and we were talking of Atlanta when he mentioned that they knew Rupa. That was too much of a coincidence.

“Do you also know them?”, he asked

“What do you mean know them? Of course, we know them. In fact they were the first Bengali family we were introduced to when we moved to Atlanta eleven years back. Rupa and I have another weird connection thru her husband Abhijeet and my wife Sharmila. Rupa’s father in law and my father in law grew up in the same small little village somewhere in Midnapore district in West Bengal. In fact, there was this time that both were visiting Atlanta and recognized each other !!!”.

Amitesh and Anusuya were also talking to them about Rupa when I got myself busy on my phone. Looked Rupa up quickly on my Facebook friend list and showed them the picture…

“You are talking about this lady, right?”
“Yes, she is wearing my saree,” Sumana responded.
“What? What do you mean she is wearing your spree??”, I asked, somewhat incredulous.

And that is when I learnt about Sumana’s booming saree business in all of US. An Indian saree merchant selling direct to Bengali women all over US? I knew I had hit the jackpot.

For the uninitiated, “Bengali woman” and “saree” are uttered like you utter “Marco” and “Polo” in that kids’ game. I was sure we were going to have a lot of intersection points and perhaps she might be the link that might get me to many of my unfinished searches!!

The conjecture was not false! In the next half an hour or so, we found out about a ton load of connections we had.

Bidisha in Dallas? Her customer!! Also, somehow I am related to her thru Sharmila. It is very convoluted but I think I am her grandfather or uncle or viceroy or something like that. Funny part – Bidisha and her husband Neil are excellent friends of Amitesh and Anusuya and that is how I got to know them to begin with!! To think, we were all standing in front of the same family that had been hosted at a party in Bidisha’s place just a few weeks back!

Satabdi from Maryland? Her customer!! Turns out Satabdi and I grew up together literally a few yards away from each other in the early 70s!

Indrani from New Jersey? Her customer again!! Funny part – I had to let her know that Satabdi and Indrani are actually sisters!!

“So, how do you know Shravani?”, I asked. By now, I was going thru Sumana’s Facebook friend list to see if there was any answer to many of my unfinished searches. “Don’t tell me – she is your customer!”

“Ummmm… let me reconstruct… yes… her husband Prasenjit was my wife’s classmate in Shibpur”.

I am fairly sure, she was thinking I waste too much time getting to know people with all sorts of weak connections.

Then there was the Narendrapur friend of mine…. and the list just kept growing!!

Finally, it was time for us to catch the return bus.

But not before I learnt an important lesson. My street Spanish has gone down considerably from those days of haggling with taxi drivers in the streets of Lima to getting myself understood of a simple request I was trying to make to the security guy outside the grocery store. Many Spanish words and wild gesticulations with my phone later, I made a breakthrough!

“Oh! You want me to take a photo”, he guy deadpanned in chaste English!

As we reached our destination, Indrajit and Sumana made me promise that they will get a chance to meet Sharmila some time.

“Only on one condition”, I insisted.

“And what could that be?”, they asked curiously.

“Just do not mention about your business to her,” I said looking squarely at Sumana! 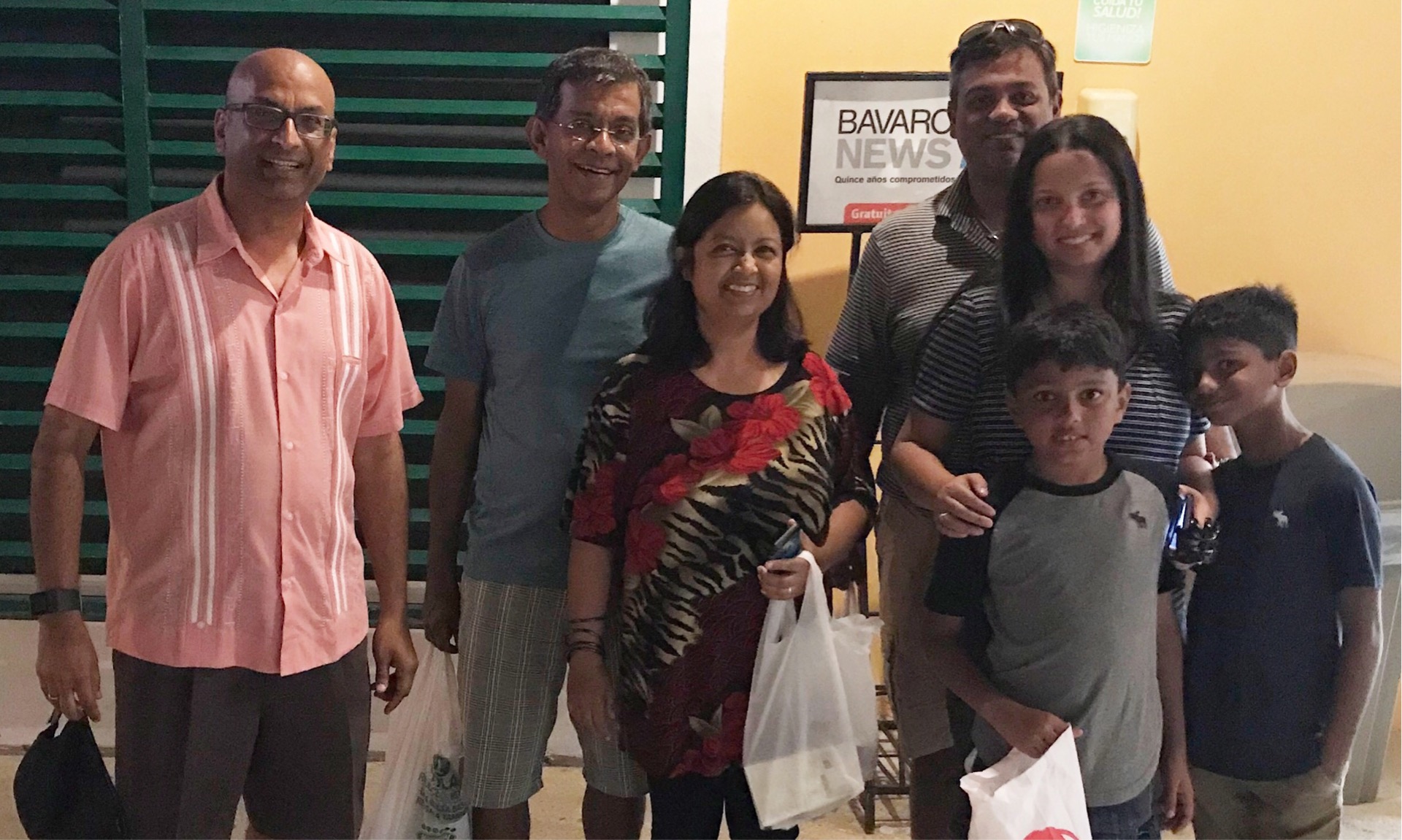 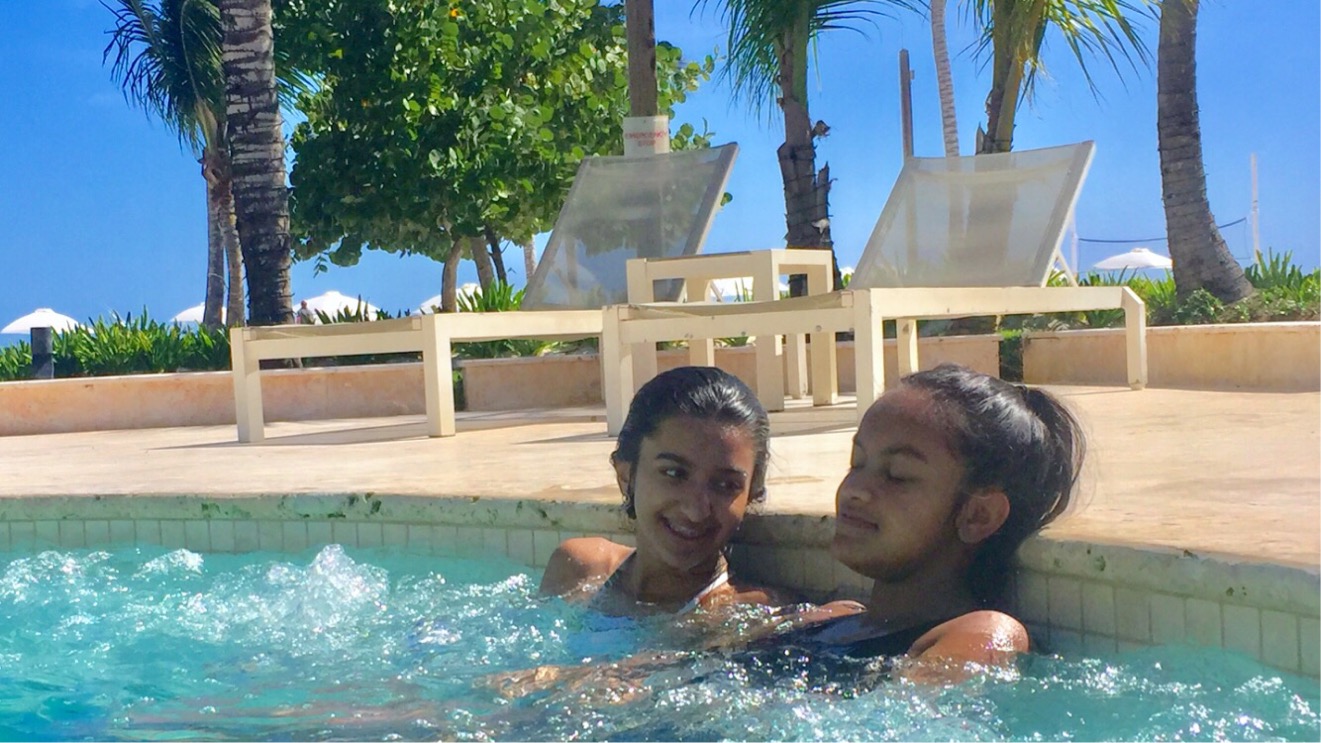 That was a beautiful trip. Thank you, Mukherjees for making it so memorable for Nikita and me! 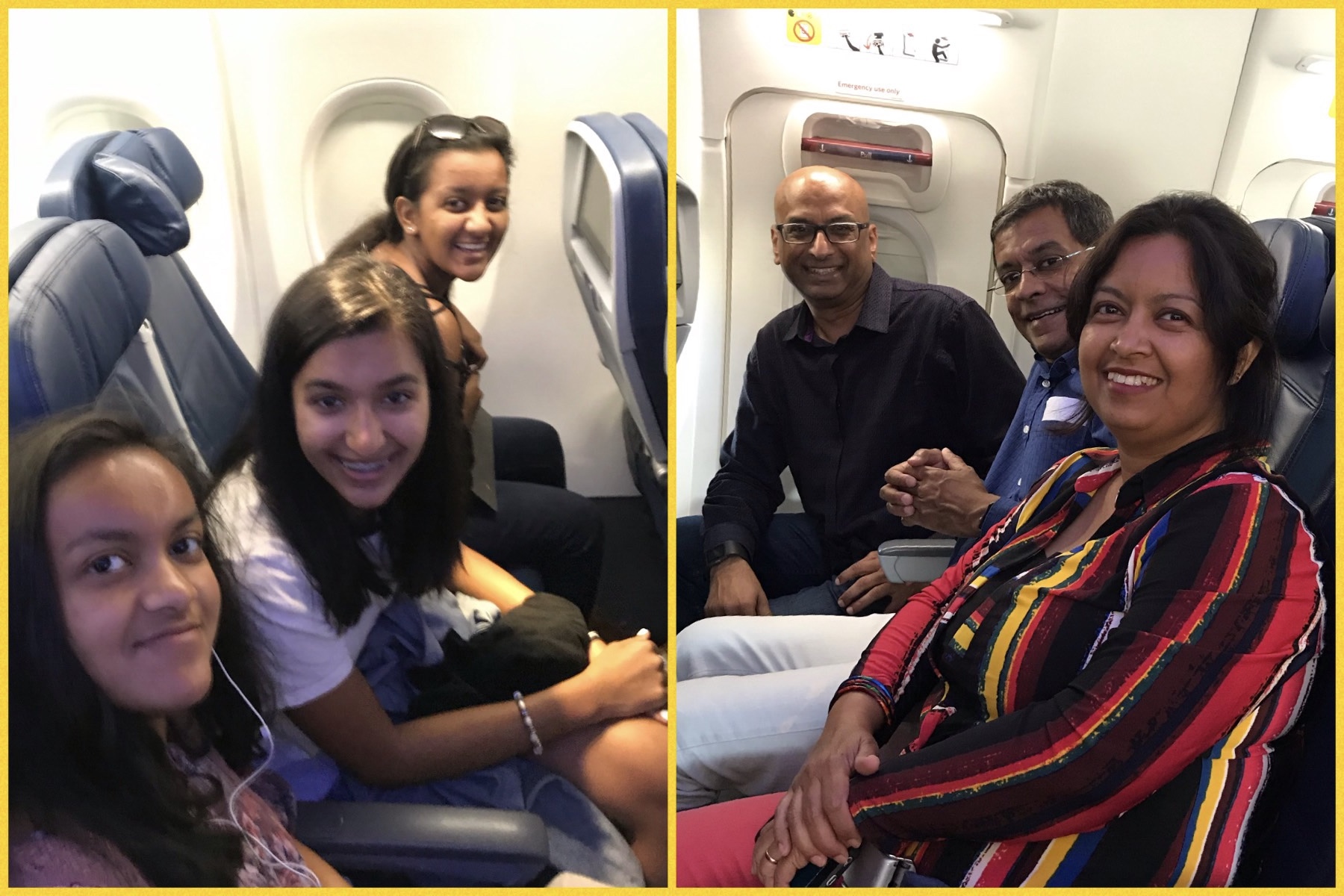 This Thanksgiving is a little different. We are spread all over the world spending time with an extended definition of family.

Sharmila is in India to spend some time with her mother (we lost my father in law a couple of months back).

Natasha is in Ghana spending time studying and looking after orphans in a school which has become her new family.

Jay Jay is with his friends in the USA.

Nikita and I are in the Dominican Republic spending time with each other and our closest family friends in Atlanta – the Mukherjees!

This year is a virtual Thanksgiving for us!!

Happy Thanksgiving to you all!!! 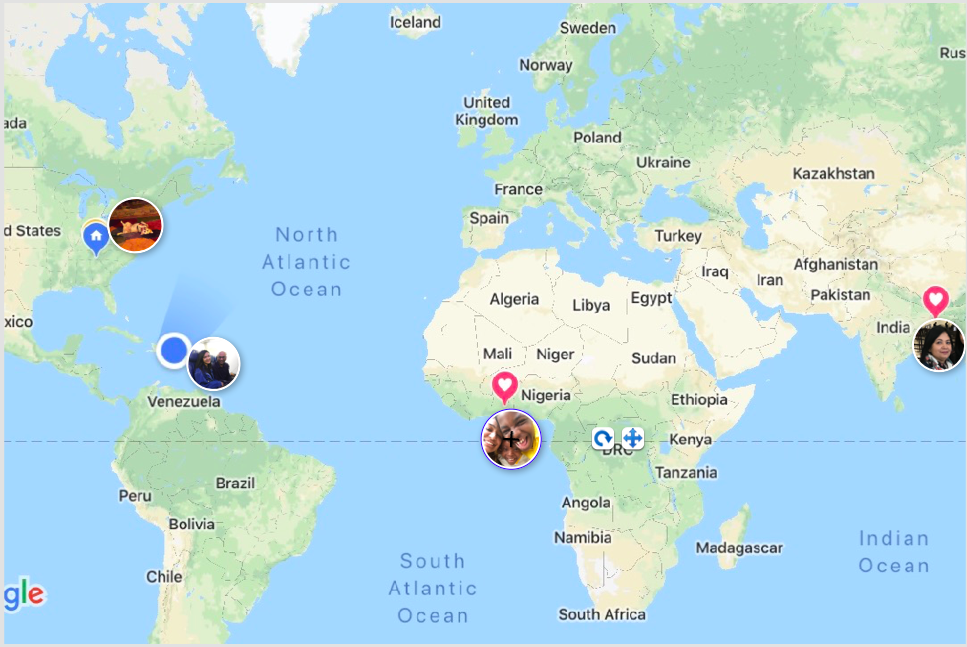 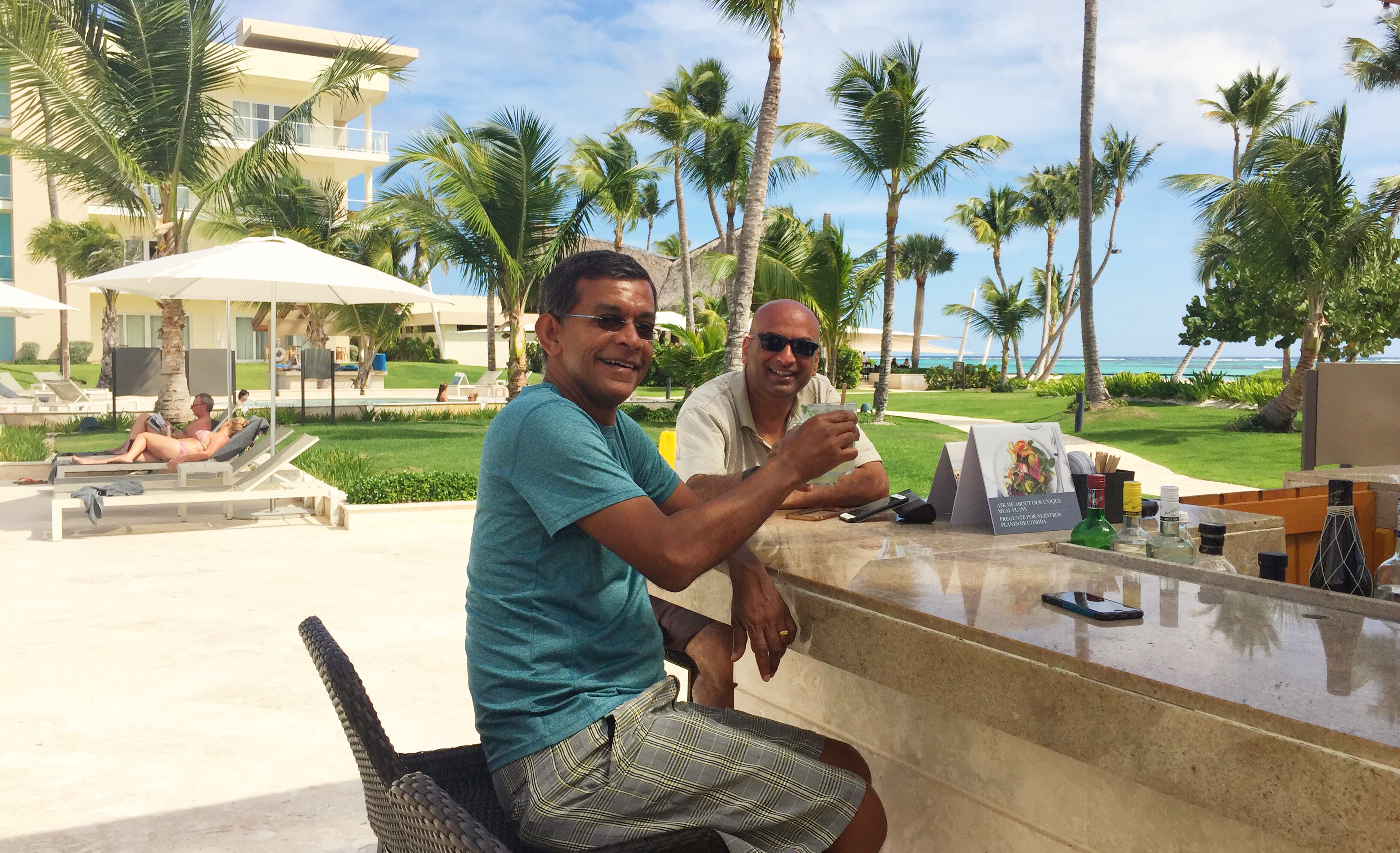 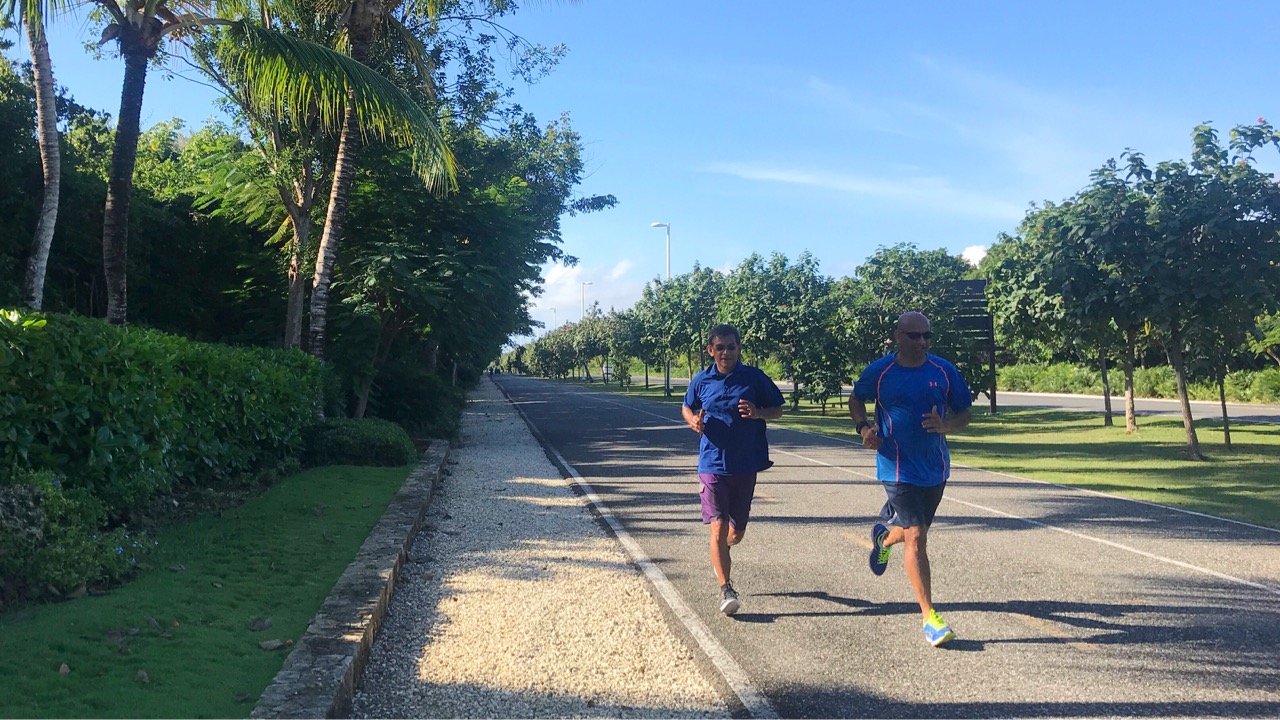