Natasha was lying down in the backyard last evening and reading a book. Took a picture of her. Because it reminded me of another day when she was still in high school. That day she was laying down in the front yard. Dug that picture up from 2015. 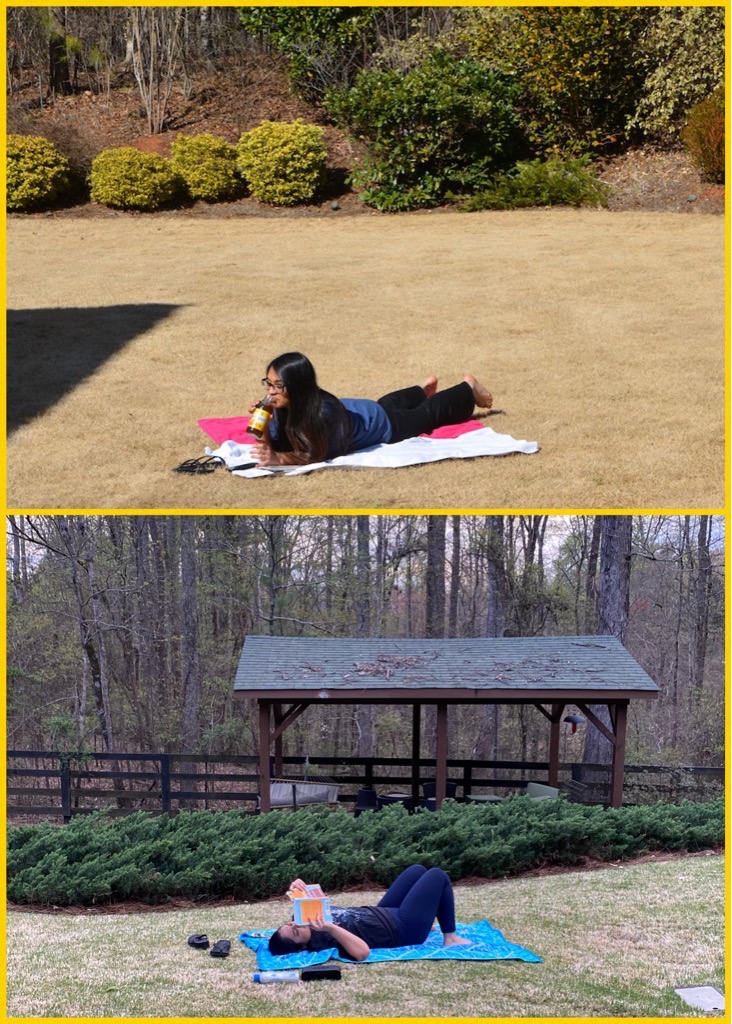 Nikita mentioned this morning that we have a picture From the past like the one we took this morning at home. Sure enough, a little search later, we retrieved it.

So much has changed in fifteen years. We have a new dog, newspapers have gone digital and we have moved from the outside to inside.

Good news is that I am still in my shorts!!! 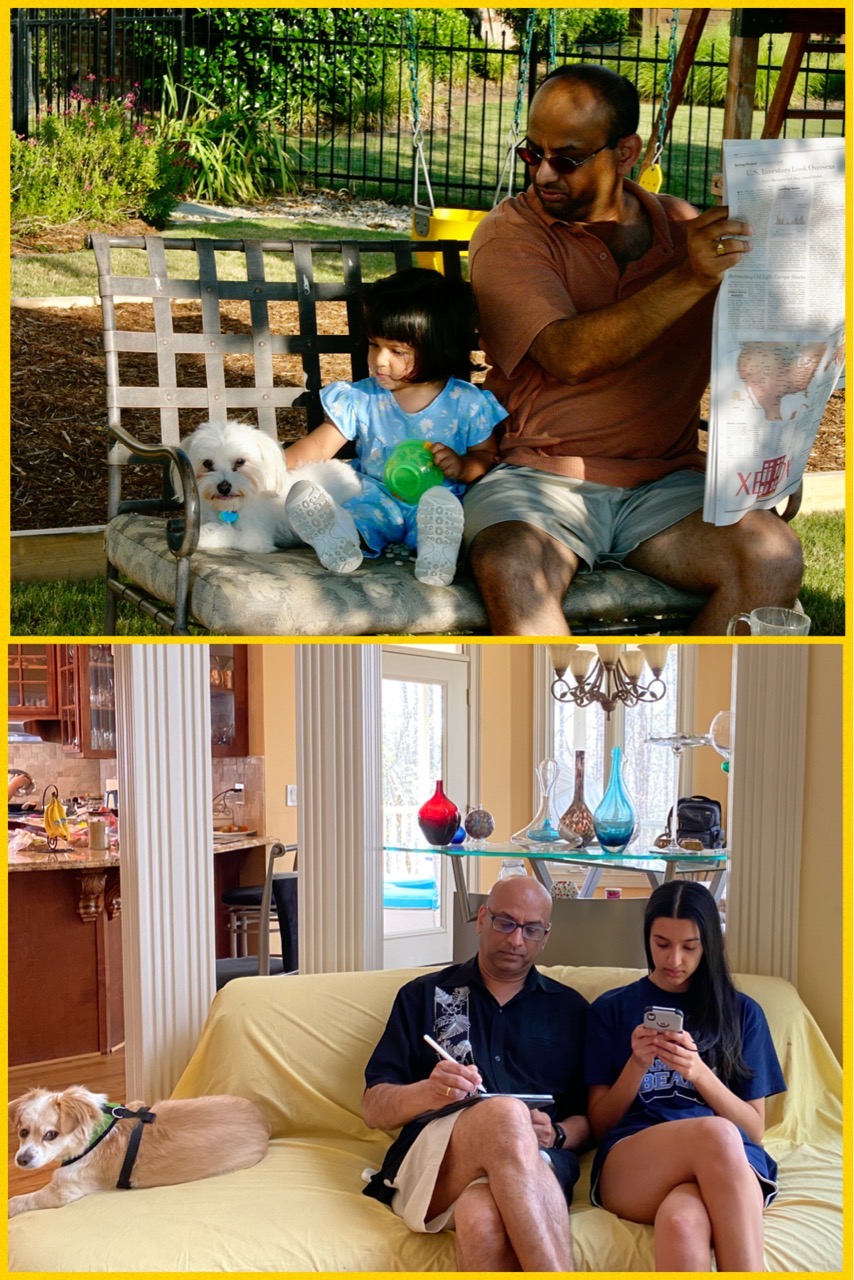 Means the roads were totally empty. An hour of driving practice for the last driver left in the house. 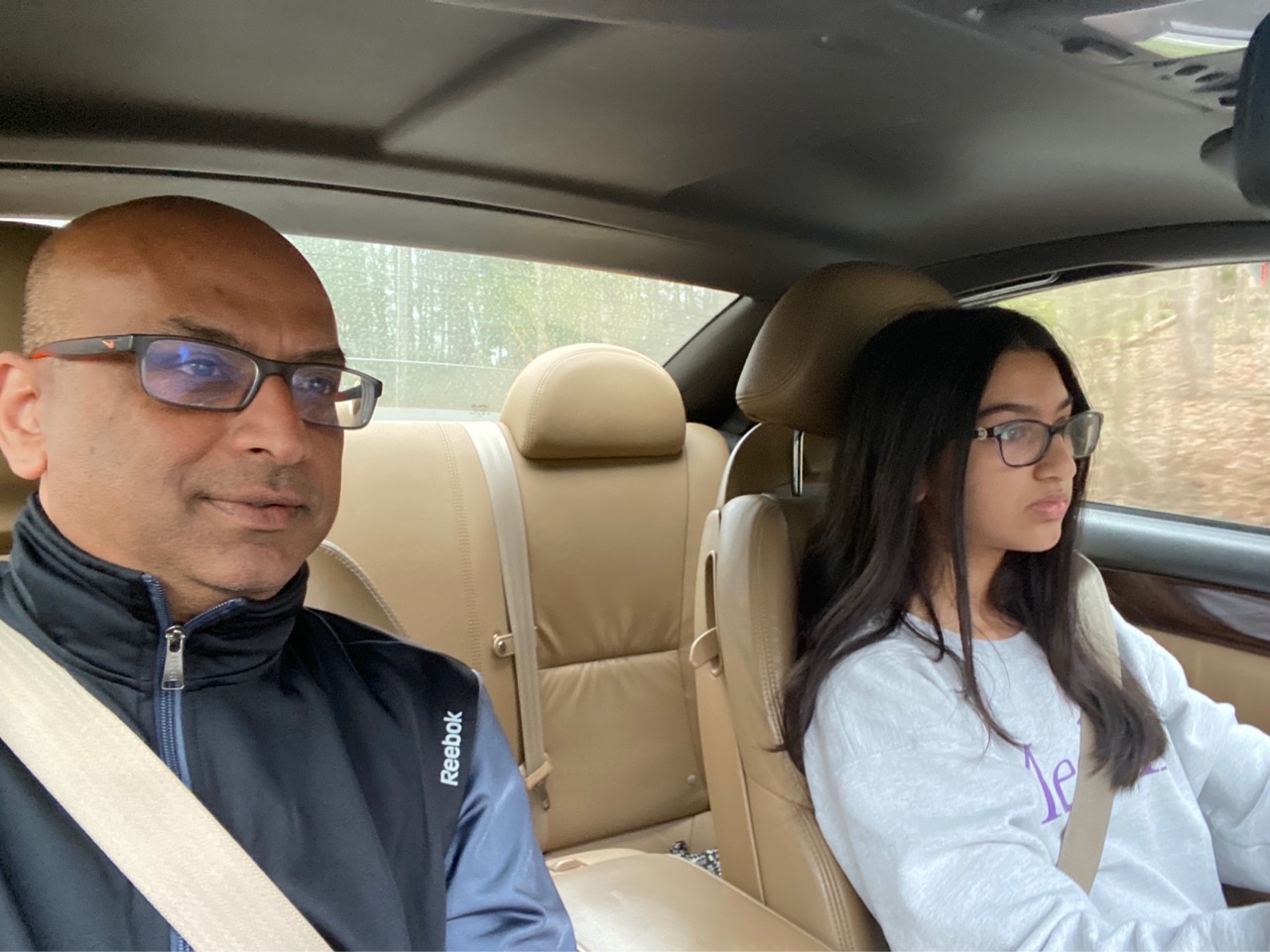 It was an interesting Saturday between trying to get some crucial office decisions done and trying to evacuate Natasha from New York. This is while New York started canceling flights because some ATC trainee had tested positive for COVID-19.

Finally, everything has settled down. For the time being. And no too soon.

In a stunning reversal of fortunes, now the young ones are yelling when the older ones want to go out for drink.

Great evening with Sharmila and Natasha over a bottle of wine… 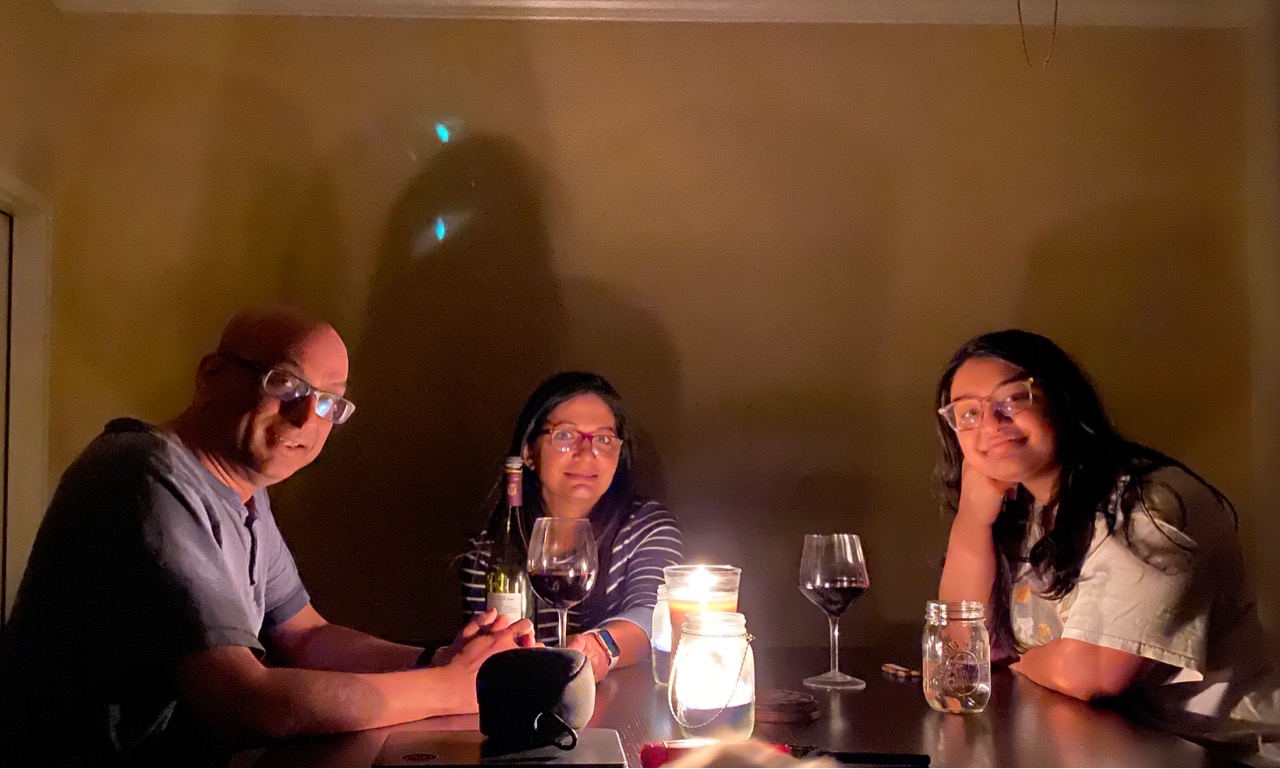 We had the huge bar completely to ourselves! We did not even have to worry about keeping 6 feet distance from anybody!! 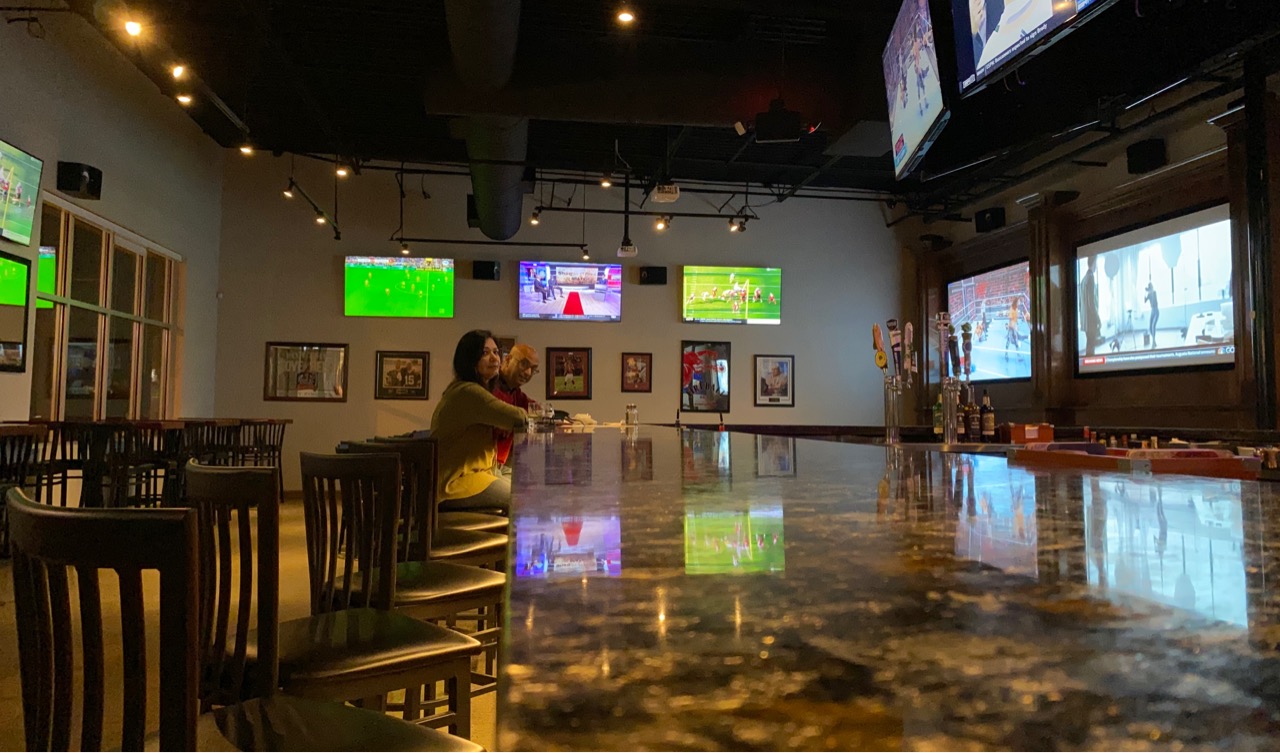 Our favorite place by the lake is open for the season again! 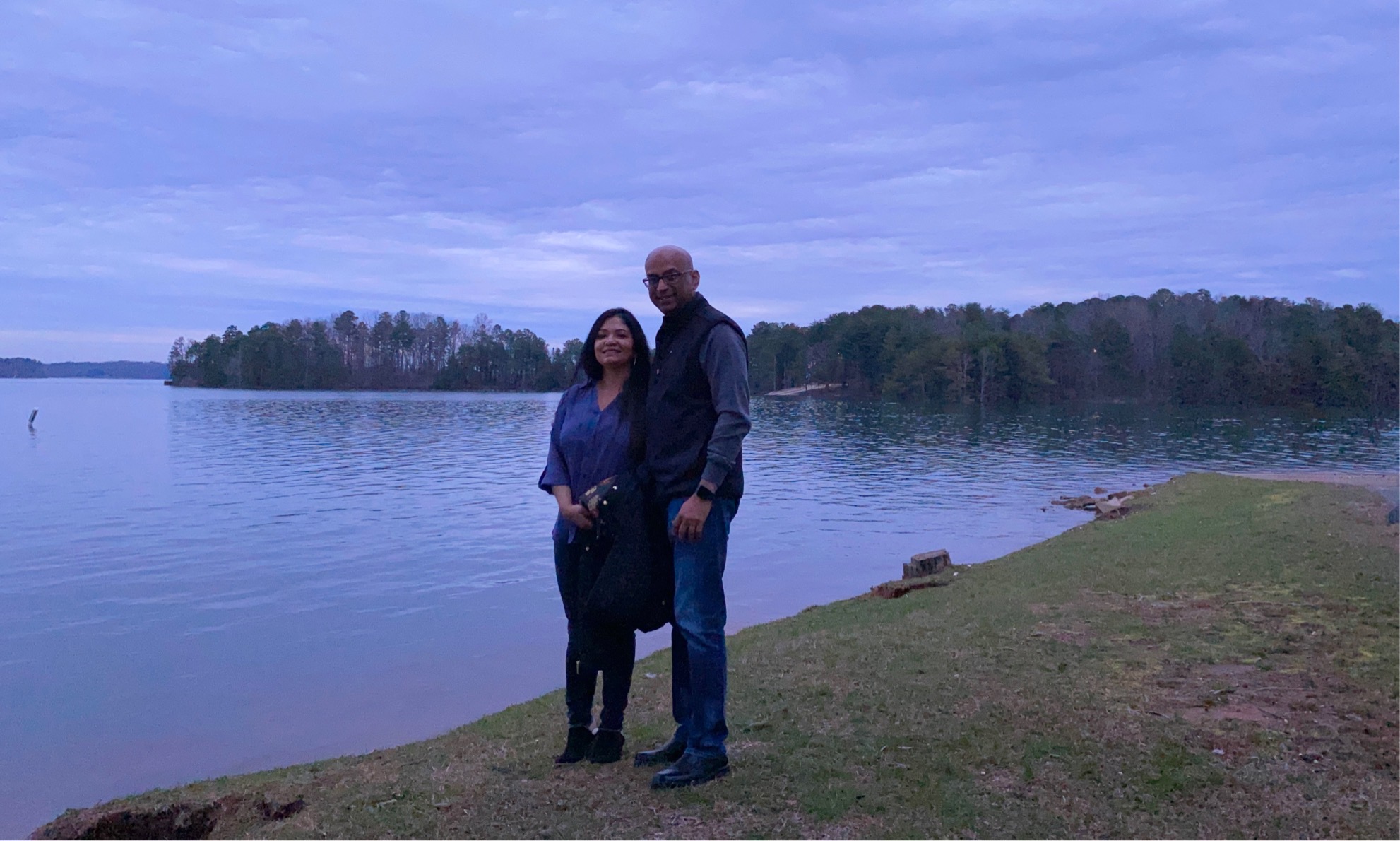 It was a full moon that night too!!

Tonight is full moon. In India we celebrate Holi – the festival of colors. The moon looks beautiful if you step out and see it. I mentioned to Sharmila – “The full moon looks perfect tonight”. She laughed out aloud. It took me a second or two to understand why would anybody laugh at a beautiful full moon. I have to take you to a post from over six years back to get the context…. Reproduced from January 7, 2014.

“
Last night Sharmila and I were in bed watching a sitcom on TV before going off to sleep when I noticed something small and shiny thru the master bedroom windows in the trees. I was trying to figure out whether it was a reflection of a light inside our house that I was seeing on the window or was it moonlight shining on some ice formation on the twigs. I straightened up and asked Sharmila – “Is that the moon”? And then for good measure threw in “Or is that your face”?

You know you have been married for twenty one years by how romantic values cede precedence to practical values. Sharmila looked at my face and the direction in which I was looking and then looking outside, said “What do you mean? How can my face be over there?”

I almost fell off my bed, guffawing! 🙂
“

Category: My Family | 1 Comment on It was a full moon that night too!!

At the inauguration of our virtuoso friend Sudakshina​​’s new studio 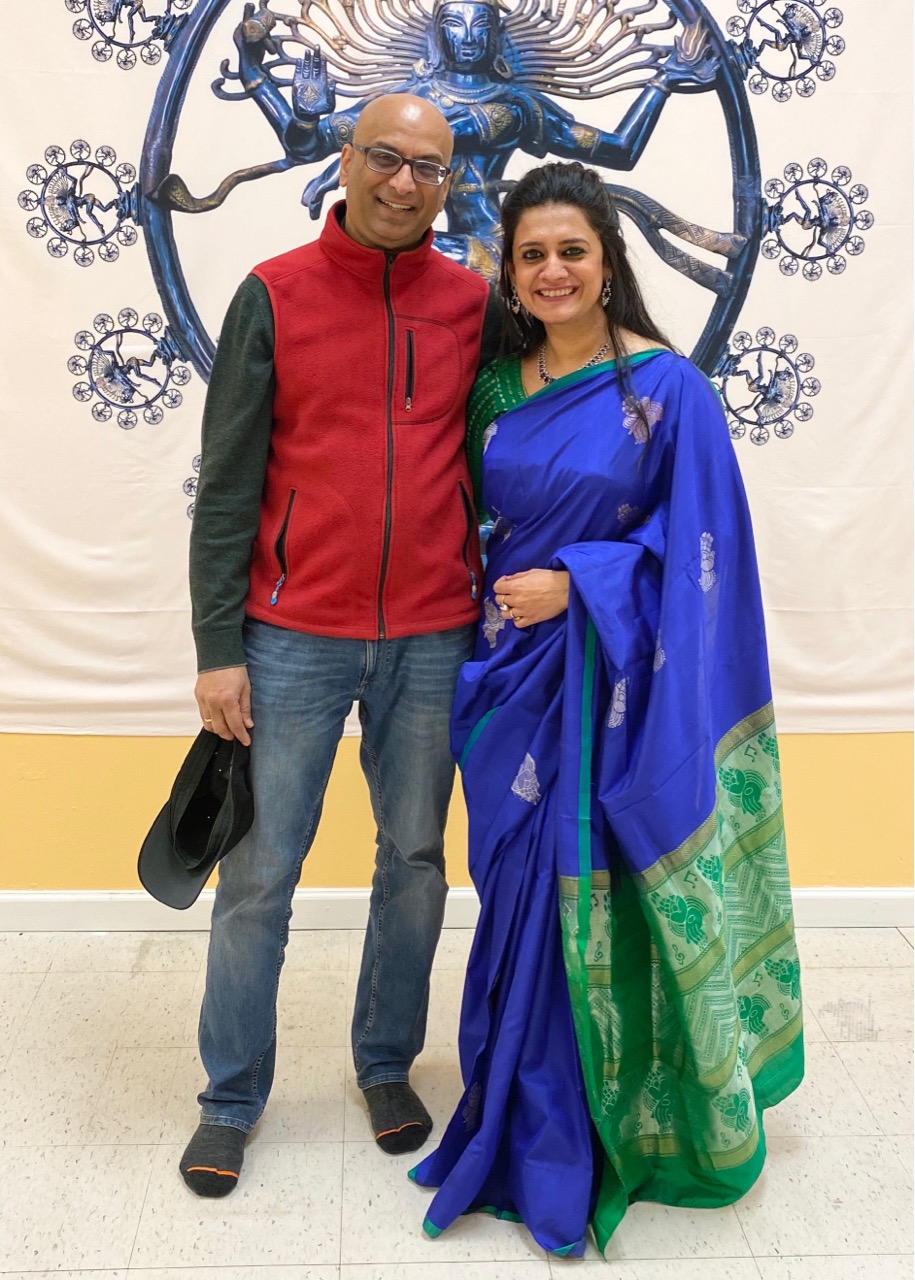 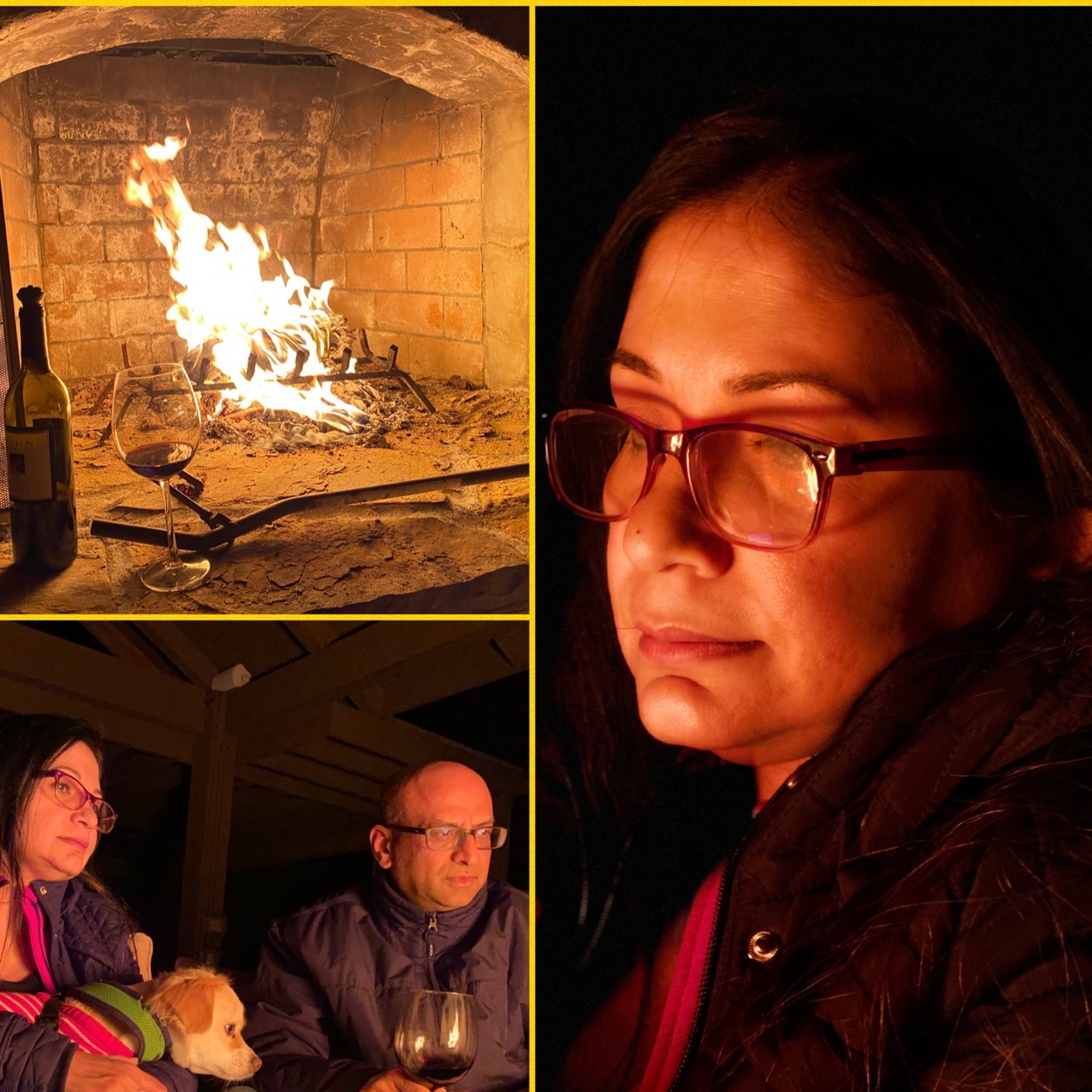 Then, a full 29 years later – after more than doubling my age – I had the chance to meet Vivek again – at a small bar outside the hotel I was staying in, in Baltimore.

The details of how I got reconnected to him is escaping me right now – but it was probably one of those days when I remember people from the past and start looking for them in Linkedin and Facebook. Fortunately for me, he had recognized me too and we had exchanged our phone numbers and most importantly – his birthday! That way I had a reminder every year to visit him if I were to be in Baltimore.

And that is where I was this week for a couple of days for a conference. Vivek was very kind to adjust his schedule at work and home and come meet me when I had some off time between all the meetings.

It was like the 29 years has never happened. We picked up from where we had left. Talking about all the old friends, the carom board outside our room, the campus, the courses and all that. I was fascinated to hear about his career and family journey that has taken him to three different countries. We also debated the pros and cons of doing MBA – specifically, which courses has really helped and which ones not so much.

The best part of our recollections was a common difficulty both of us had faced separately. Both of us had a lot of exposure to computer programming – unlike many other students – before we joined the MBA class. And both of us (in two separate years) had agreed to help our colleagues with the programming assignments in the introductory programming class in our MBA. In fact, we called them “rems” (remedial classes?). Basically, some of the fellow-students would gather in a dorm and I (or he) would use the blackboard on the wall (every floor in the dorm had a blackboard those days) to explain the basics of programming languages.

And sadly, neither of us quite figured out how to convince our non-programming friends that in computer science, it totally cool to write:

It did not help that some of them had math degrees before coming to do MBA!!! 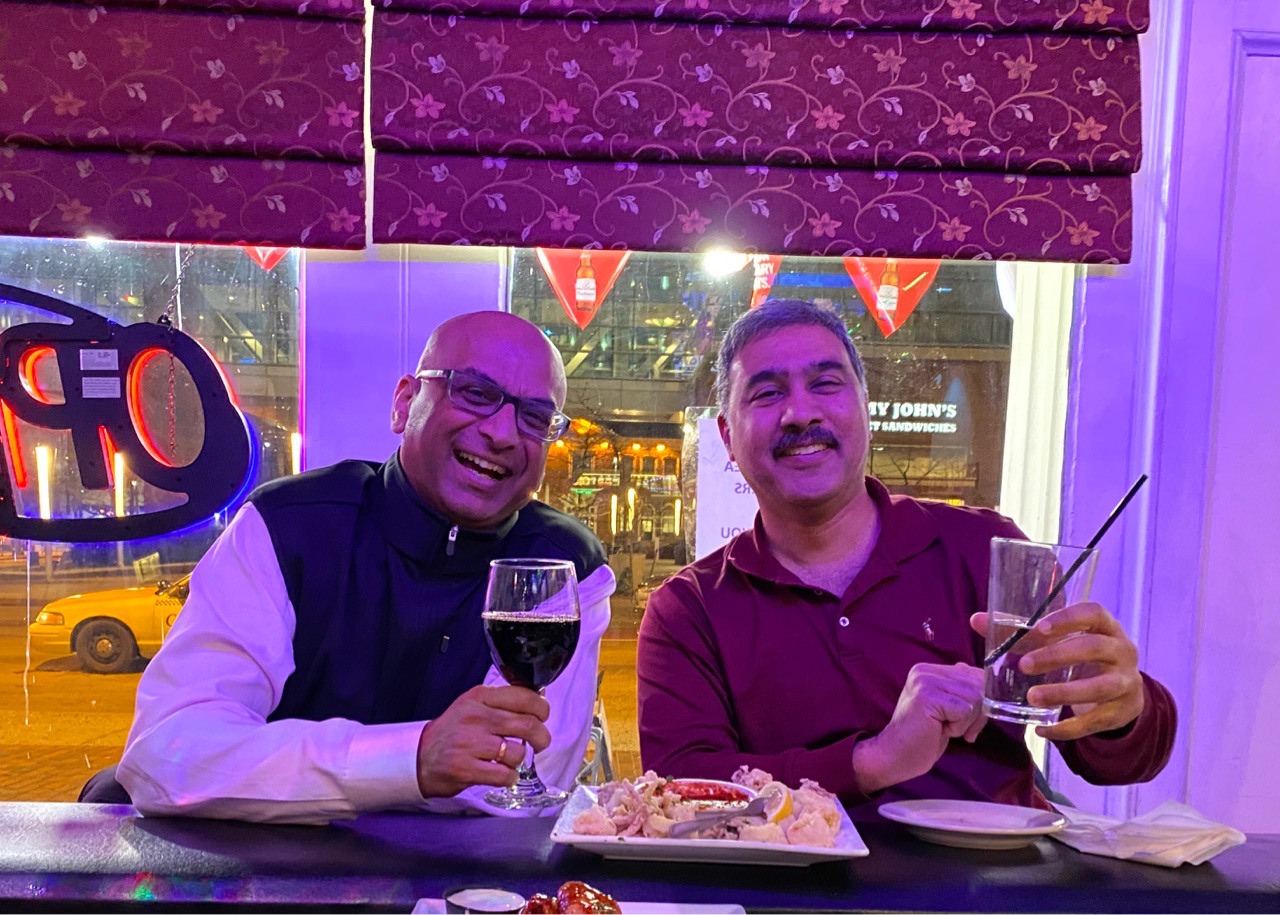